Value of building permits declined across Canada in September: StatsCan 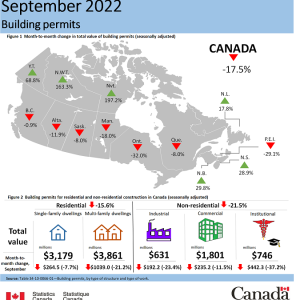 The total value of building permits in Canada fell 17.5% in September to $10.2 billion, the largest recorded monthly decline. This was the first time all survey components posted monthly decreases since September 2019. Both the residential (-15.6% to $7.0 billion) and the non-residential (-21.5% to $3.2 billion) sector posted declines.

The value of residential permits decreased 15.6% to $7.0 billion nationally in September, with a similar decline in the number of units (-16.0%) being built.

The value of building permits in the multi-family component tumbled 21.2%. This drop was largely due to Ontario, which fell 39.6% following a record high in August. While August saw the submission of four permits valued at over $100 million in Ontario, including one for $480 million, there were no permits in September to break the $100 million mark.

The total value of building permits in the third quarter of 2022 decreased 6.3% to $33.7 billion after three consecutive quarterly increases.

The residential sector declined 5.6% in the quarter, with decreases posted in all provinces, returning the sector to historic levels following a strong second quarter. Single-family permits declined 9.0%, while multi-family permits were down 2.6%.

Overall, the number of new units slated for construction in the residential sector declined 7.4%. Much of the decrease stemmed from the multi-unit component (-7.8%) as it reached its lowest point since the third quarter of 2020. Single-family intentions saw a 6.2% decline.

The non-residential sector saw a 7.9% decrease to $10.8 billion, with declines in all components.