Drywall prices we monitored at specific Home Depot stores in Vancouver and Calgary went up by 67 per cent, as of Oct. 11, since the tariffs were imposed

As reported in Canadian Contractor last month, a new tariff on U.S. drywall took effect on shipments entering Western Canada beginning September 6, the result of a complaint to the Canadian Border Services Agency (CBSA) by CertainTeed Gypsum Canada re: alleged ‘dumping’ by U.S. manufacturers of cheap product into this market.

The tariffs, ranging from 125% to 275%,  are provisional until public hearings and industry representations are heard in early December, at which time a final ruling will be made.

The impact on drywall installers has been significant, with many complaining that they are being unfairly punished by fixed price contracts made prior to the tariff being announced. Over the longer term, if the tariff ruling is upheld by the CBSA, the steep price increase for drywall in Western Canada will add thousands of dollars to the cost of new homes, and also impact the pricing for renovation contracts.
What is ‘dumping’ and who’s saying what about drywall dumping?
CertainTeed Gypsum Canada’s official statement about their dumping complaint 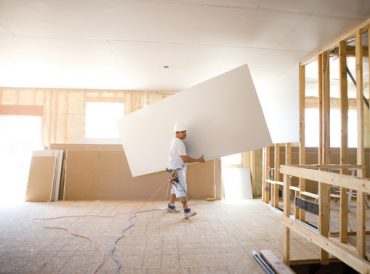 Drywall installers and contractors of all sizes are upset over new tariffs on imported gypsum wallboard.

We’ve been tracking prices. Here’s what we found
Canadian Contractor has been tracking the price of drywall since mid-September, using ‘Sheetrock’ UltraLight board manufactured by CSG of the USA as our standard. CSG is owned by USG Corporation, headquartered in Chicago, and is one of the U.S. manufacturers impacted by the tariff. Since the identical product is sold across both the United States and Canada by Home Depot, one of the few retailers publishing on-line prices, this seemed a reasonable way to survey pricing across both countries.

We monitored Home Depot pricing for this product in Saint John, NB; Orillia, ON; Calgary, AB; and Vancouver, BC. In the USA, we monitored pricing of the identical product in Sarasota Springs, NY; Spring Hill, FL and Seattle, WA. For conversion to Canadian dollars we used an exchange rate of 1.35.

Prices are shooting up in the West
In mid-September, shortly after the new tariffs were announced, the price of a standard-sized sheet of  4′ x 8′ x ½” CGC Sheetrock ranged between $6.99 CDN (Orillia, ON) and $9.99 CDN (Saint John, NB), with Calgary and Vancouver in the middle at $7.49 CDN, for a Canadian average of $7.99 CDN. In the U.S. , the average price was $12.34 (CDN dollars after conversion as above), an average difference of 54% between the two countries. (Prices in the U.S.A. were almost uniform, although highest in Seattle and lowest in Florida.)

Then, prices in Canada then began to move upward, while prices in the USA remained stable.

By October 11, the average price in Canada had increased to $11.29, due almost entirely to increases in the West. Specifically, Vancouver and Calgary surged to $12.49, an increase of 67%, while the average USA price dropped slightly to $12.21, cutting the national average difference to only 8%. (Curiously, the price in Saint John, NB also increased, to $12.39). 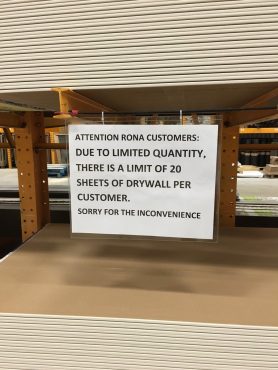 Many customers made a run for the shelves when the tariff was first announced, resulting in supply issues in some areas.

Supply issues have been reported
In the immediate aftermath, there are reports that store shelves were cleared when the tariff was announced. One Edmonton contractor told Canadian Contractor, “We have seen the shelves at Home Depot empty of drywall as contractors stocked up on it before the prices skyrocketed.”

How are manufacturers reacting to this tariff?
Canadian Contractor contacted CSG for their comments on the new Western Canadian tariff, and asked if they would be participating in the hearings in December.  They replied with this official statement:

CGC is disappointed in the provisional tariff on wallboard imposed by the Canada Border Services Agency. We feel these tariffs are not in the best interests of consumers.

CGC continues to participate in the ongoing proceedings before the Canadian International Trade Tribunal with the hope that these tariffs are reduced or eliminated.

We are committed to the Canadian market. For more than 100 years, CGC has been making wallboard in Canada, with more than 700 employees, five manufacturing plants and several distribution and customer service centres across Canada. We base our decisions on what is best for our customers, focusing on supplying the best quality building solutions in a timely manner.

CertainTeed’s U.S. sister company also impacted by tariff
Although not among the six U.S. manufacturers named by CertainTeed Gypsum Canada for dumping product into Western Canada, their sister company CertainTeed USA was also hit by 125% tariff. Canadian Contractor wanted to know how the U.S. company felt about this. In response, CertainTeed USA re-issued the statement made by CertainTeed Gypsum Canada several weeks before that explained their reasoning behind the request for tariff protection, adding that they “have no additional comment in addition to the statement.”

Canadian Contractor will continue to monitor the situation leading up to the CBSA hearings in December, including reactions from contractors and drywall installers.