What Canadian builders can learn from Hurricane Michael

Building to code minimums is not enough

The scene from Mexico Beach, Florida is pure devastation. The gulf side village on Florida’s northern panhandle has been virtually blown off the face of the earth by Hurricane Michael. What remains is largely a series of empty concrete pads and scattered debris.

Yet among the devastation are some buildings that appear to have withstood the hurricane’s lashing relatively intact. Why? And what can Canadian builders learn from that experience?

What lessons can Canadian builders learn from Michael?
In Florida and other parts of the southern and coastal USA, it’s about hurricane-proofing from extreme wind and storm surge damage. In Canada, it’s about snow loads and cold weather. As in the States, the added cost of going beyond current code in Canada to meet the extremes of our respective climatic demands is small. “The cost increase to provide additional reinforcing for either snow or wind loads is negligible, if the reinforcing is done at the time of the original construction of the building,” Rod Young, an Orillia, ON architect told Canadian Contractor.  “Done later as a retrofit, reinforcing of any type is far more expensive to carry out. Up north we focus on roof loads from snow that could crush a building. In the south the major concern is uplift from wind that can lift a roof — totally opposite directions of loads!”

Hurricane Andrew in 1992 was a wakeup call
The destruction of so many homes in Florida alongside the survival of a few others all goes back to the structures themselves — a combination of the era in which they were built and the building codes that were in effect at the time of their construction. Back in 1992, Florida was hit by Hurricane Andrew, a Category 5 storm that destroyed 125,000 homes and some 80,000 businesses. At the time, it was the costliest storm in U.S. history, and provided a wakeup call for legislators to beef up the state’s building code in 2001, calling for homes that would withstand winds up to 120 mph.

It is said that today, Florida has some of the strongest and best enforced codes in the country. However, that doesn’t help homes built prior to those codes coming into effect. According to Garett Walton, CEO of Rebuild Northwest Florida, older homes built in the years before World War II, for example, have tended to survive hurricane forces much better than those built during the post-war boom years.

The catch for the Florida panhandle area, however, is that the new and improved state building code only applies along a one mile strip of the coast. Homes further inland are vulnerable if the builder chooses to construct short of the more stringent coastal code requirements. 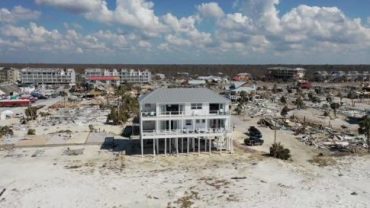 The owners of the “Sand Castle” vacation rental home in Mexico Beach, FL decided they wanted their building ready for “the big one.” It was smart move!

Building and designing beyond code saved buildings from destruction
The buildings that made headlines by withstanding Hurricane Michael were designed and built well beyond even the latest Florida code. Notably, a three-story rental home called the Sand Castle sits high above concrete pilings that extend 40 feet down. The walls are also made of concrete. Steel cables link the pilings through to the roof and down the back wall. Void space under the roof was minimized to reduce lifting. The siding was designed to break away without damaging the main structure. The result is a house that can withstand winds up to 250 mph.. Other homes that survived well were built of ICF, due to their concrete component. It seems that in the southern U.S., ICF finds favour beyond its well-known insulation qualities.

Connections matter
Interestingly, Florida codes governing the wall assemblies themselves are not dissimilar from those in Canada. It’s more a matter of connections. At their base, many homes are simple stick structures with their sill plates pinned to concrete pads with a few bolts. Slabs are popular in areas like Florida because they are inexpensive and ground water lies only just below the surface. Around the edge of the pad is a concrete beam perhaps 24-inches deep. Inside lies a bed of gravel and a layer of plastic over which concrete is poured. It’s called a floating pad. It doesn’t take much for the entire building to be ripped off its pad by high winds or a storm surge. There are stories of homes in the panhandle area that were found almost fully intact but relocated by Michael hundreds of feet from their original pads. 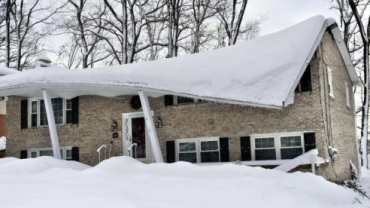 Extreme snow loads in Canada is one of many reasons why building beyond code minimums is a wise decision.

Hurricane ties to prevent roofs from being blown off are part of the standard precautions for a home in a high wind or storm-prone area. Coastal areas of Canada face similar issues. “Often the difference between a roof that stays on and one that flies off is the connection method,” Leslie Chapman-Henderson, president of the Federal Alliance for Safe Homes, told the Washington Post. “A handful of additional nails can mean the difference.” Using heavier lumber, windstorm plywood and metal roofs also are methods beyond code that helped some homes in the Mexico Beach area survive.

However, cost is always a factor. Yet the cost of upgrading storm precautions beyond code is not as high as many suspect, particularly at the build stage. The owners of the Sand Castle estimate that all their extreme precautions added only 15 per cent to the cost of the building versus the same house built to state code. Other experts estimate the cost of reinforcing a more standard design might add as little three to five per cent to the new build cost.

‘Net Zero Energy’ or ‘Net Zero Impact’
Reasons to go beyond current code in Canada focus on insulation. However, the vast majority of homes constructed in Canada during our decades-long new housing boom continue to be built with little or no regard for simple things like thermal bridging and air tight sealing. With new building code requirements thought to be on the near horizon, one wonders if all the hoopla around Net Zero Energy is having a “Net Zero Impact” on most Canadian home construction. Does the country have to wait for legislation?

1 Comment » for What Canadian builders can learn from Hurricane Michael