What’s a Unimog? And why did this contractor have his confiscated?

This might just be the most outrageous example of an unjustifiable vehicle impoundment in contracting history. 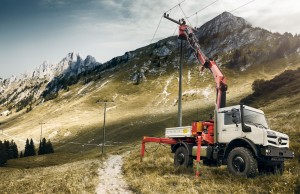 Contractor Erwin Zimmermann was the proud owner of what is possibly the most capable vehicle on the planet, a Mercedes-built Unimog. A “Mog” is a hybridization between a truck and a tractor – and it’s extremely rare to see one anywhere in Canada. It’s a pure beast on all terrains.

When he began to operate his Mog in Ontario, Zimmermann found that he was constantly being pulled over by the OPP. Obviously the cops wanted to find out if what he was driving was even legal. After Zimmerman had accumulated 17 Highway Traffic Act (HTA) charges, his Mog eventually was impounded by the authorities.

The authorities couldn’t decide if the “Mog” was a tractor, a road building machine (RBM) or a truck. They didn’t know what kind of vehicle permit it needed and what type of vehicle insurance. And, yes, they wanted to know if it needed a Drive Clean Test!


While his main revenue-generating vehicle was impounded, Zimmermann continued to carry a huge debt on it. Finally, after lots of legal wrangling, the authorities sold his vehicle at auction to someone else – for a fraction of Zimmerman’s outstanding loan on it.  Late in 2002, Zimmermann traced his “Mog” through its VIN number. By way of a Drive Clean test, assumed carried out by the new owners, it was now listed as a Freightliner!

Zimmermann feels that his vehicle was essentially stolen from him. He says the government departments involved were heavy-handed in dealing with him.  He is continuing his fight to regain his vehicle or to be compensated for it.

Zimmermann is an upstanding citizen, by the way. He received an OPP Commissioner’s Citation for Bravery on January 16, 2002. Showing no regard for his own safety, he confronted two suspects who were breaking and entering a convenience store in Victoria Harbour, Ontario. It’s ironic that Zimmermann has been both singled out for a commendation from the OPP and also treated like a common criminal.

Zimmermann says that Ontario’s Ministry of Transportation will no longer respond to him. Even a letter to Prime Minister Harper in Ottawa has met with no response. No one, it seems, wants to deal with him.

By the letter of the law, under Ontario’s Highway Traffic Act (HTA), Unimogs are, in fact, classed as Road-Building Machines. They are considered to be off-road vehicles, and are subject to the same rules as a tractor or a backhoe.

Ontario RBMs are exempt from the following:

At time of writing, Erwin Zimmermann continues his fight for fairness and justice. We just have to ask, why would any government treat any law-abiding, hard-working citizen this way – let alone one who has had police commendations for his behaviour in the past?


By providing education and training, CARAHS reduces your risk of fines, job site closures and prosecution under the Ontario Occupational Health and Safety Act. We are independent of unions and government.