What would you do? Send us your resolution to this business problem...and enter our contest to win!

Editor’s Note: This contest is now closed.
We thank you all the entries received!

Here’s the dilemma
Dave Shankovitz’s renovation business has increased steadily over the past few years, with two crews running simultaneous projects. This is largely due to his trusted carpenter Pete Caldwell. Dave and Pete have worked together for many years. This spring, Dave asked Pete to act as his ‘eyes and ears’ on one of the two job sites, a sort of Team Leader, allowing Dave to focus on the business while also supervising the second job site. 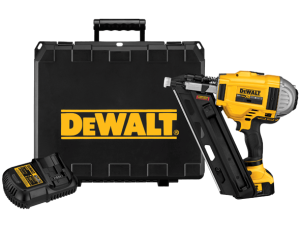 You could win this DEWALT cordless nail gun!

Pete has always been on an hourly wage and submits his time sheet every two weeks. Dave recently increased Pete’s hourly carpentry rate because of his added leadership responsibilities. They’re friends off the job too. Their wives take yoga classes together, and the couples enjoy meals together every few weeks.

However, Dave has observed a change in Pete’s work habits in recent weeks. Pete has been showing up on site at 9am instead of his customary 8am. He also spends a good part of the morning walking around the site before picking up any tools to work. However, his time sheet still shows him arriving at 8am. Dave also learned that Pete was leaving at noon on Fridays to go to his cottage, but was still putting down 4:30pm as his check out time.

Last week, Pete put forward the idea of moving away from an hourly wage and becoming a profit-sharing partner with Dave. Given Pete’s work ethic and his less-than-honest accounting of hours, Dave wonders if his long-time friend and carpenter is the right kind of partner. Turning him down might mean a loss of a good worker entirely and a good friend.

What should Dave do?

Send me your choice of alternatives, along with a brief explanation to:

(Please do not use the comment section below for your responses)

You could be eligible to win a DEWALT XR DUAL SPEED cordless framing nailer
(Retail price: $549)

Related
CASE STUDY: What Would You Do? Help this contractor and you could win a DeWalt XR Dual Speed cordless framing nailer
What Would You Do Contest: The winner is…
Act fast! Win a DeWalt 60V cordless track saw!
FlexVolt & brushless motors: DeWalt’s giant leap towards the cordless job site