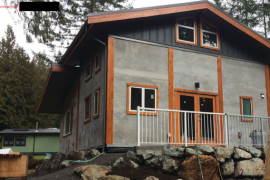 In November, Canadian Contractor closed submissions for the 2020 GRK Contest where one lucky Canadian contractor won $5000 worth of GRK fasteners and a Paslode XP framing nailer.

The winner, Jayeson Hendyrsan, is one of Canada’s most adept craftsmen in building mass walls from lightweight concrete. He is a co-founder of Hempcrete Natural Building, on Bowen Island, B.C.

How did you first start out?

I had been doing construction in Vancouver and then moved out to a small island off the coast of Vancouver in 1999. I wanted to build a home from alternative materials and experimented with lightweight concretes. A friendly neighbour was an engineer with a PhD in concrete. He was from England, where hempcrete was more commonplace. He advised against using straw as a concrete additive because it rots.

So, we built our first house with hempcrete in 2002. It was a ranch style and it was a big risk at the time. We had two carpenters helping us and the one guy didn’t like it at all. I thought he was going to bail at any moment.

The home turned out so well it energized us. We dramatically increased our efficiency on the next build. Since then we’ve built over a dozen single family dwellings, multiple outdoor projects, hempcrete art projects, commercial projects. We incorporated in 2006. 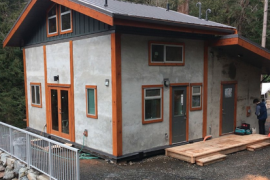 We had a large crew for our first house and it took us three months to finish the hempcrete portion on a 1,000 square foot house. Our second, 2,200 square foot house took us nine weeks with half the crew. Now, if we have a good-sized crew, we can do a 2,500 square foot house in 10 days. We average between four and 12 employees at a time, and we subcontract a lot.

We were focused on single family dwellings up until about three years ago. I realized I was never going to solve the problems of the world – or even problems in my community – by building one-off houses. These houses are very time- and energy-consuming so we looked at ways to affect the housing supply crisis in a positive way. We were a boutique company, ready to grow – so we put energy into creating designs that could be implemented anywhere in the country. We have models from 300 square feet to 1,200 square feet.

We’ve kind of gone underground for the last three years, developing these prefab designs. It’s been an intense and prolonged R and D process to work out all the kinks. We also started building hempcrete houses on metal frames. Like a little mobile chalet.

You won the GRK Grand prize for a hempcrete home on a metal frame. Tell us some of the details.

It’s about 1,100 square feet with the addition. It’s a cute little two-bedroom house. As far as I know, it’s the first hempcrete home of its kind built by a licenced hempcrete builder and fully insured by a new home warranty. This is so key – no one else has gone to this extent with hempcrete – to become a licenced, insured, commercial hempcrete builder.

Our first project like this was a design collaboration with a friend in Alberta. You’ve got frost-heave and uneven terrain out there, so it’s a common solution to build small houses on skids. I also built something like this at my own place, so we’ve done a few prototypes before this one.

We call this a “not-so-tiny” house.

A tiny house can be a Cinderella fantasy for people who want to tow around their home like a trailer yet still be able to preserve a batch of tomatoes or process wild game. There’s no kitchen for that. We think the minimum size should be 600 square feet for a home with a modest footprint that can support a resilient lifestyle.

We built the house under a very large construction tent in a gravel pit. We pulled it out, put the roof on it and finished everything. We sold it and delivered it to the client’s place. They wanted a larger kitchen so we built an addition on-site.

This is one of our potential models for a housing solution. The whole idea is that all the expensive stuff – the mechanical, the heating, the electrical, the plumbing – would be delivered in the two-storey box. Then you’d have the ability to hang one-storey additions off all four sides potentially. Our website shows all these conceptual plans.

That house is almost entirely built from GRK screws. The whole roof is fastened with #12, four-inch GRKs – that’s my favourite for framing. For earthquake resistance, our double top plate assembly is #12, four-inch screws into the first plate and the RSS three-eighth by six inches into the second top plate. We have four screws fastening the top plates into each two-by-six stud.

Europe is way ahead of us. They’re building row-housing, Costco’s, Walmart’s, industrial spaces out of  hempcrete. In the early 1980’s, the French got onto the hempcrete. They sampled old Roman aqueducts and architecture and found it was a mixture of hemp, lime, oyster shells, volcanic ash, and whatever else they had. They had discovered how to make concrete that lasts thousands of years. In Europe, because land is so expensive, developers own, maintain, and rent out office space, storefronts and dwellings as a source of income. They are drawn towards energy efficiency, low maintenance costs, and longevity in their projects because they are involved for decades and decades. In North America, developers build and sell and walk away. 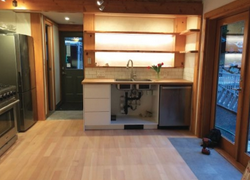 We’re building carbon-neutral, earthquake and flood-resistant, soundproof, fireproof, mould-proof, rot-proof, carpenter ant-proof houses on par, or potentially less than a new build nowadays. It’s a mass wall system made from fibre-reinforced lightweight concrete wrapped around a traditional timber frame or metal frame structure. We get rid of the exterior cladding, the vapour barriers, the insulation, the spray foams, the drywall – all of these things that take so much time and energy to erect but also to make. We don’t talk about energy input and the carbon cost of producing and bringing vinyl from overseas…and then throwing it in the landfill in 20 years. I’ve got the numbers on hempcrete and it is carbon-neutral and in 20 years can even be carbon-negative.

What are some problems you see within the building industry?

Bureaucracy and insurance have taken over the building industry. Don’t get me wrong, I’m part of the system, and I love our insurance provider, WBI, they’re amazing. But this is a real example – I have a friend who was forced to spend an extra $200,000 to create an additional 10 per cent efficiency on his project. They aren’t even counting carbon inputs. All these good intentions have been trodden by actual outcomes. I have it from three sources high up in boardrooms of large insurance companies that the failure rate of these complex, airtight building systems based on mechanical efficiency are starting to show a significant failure rate. I know a Vancouver guy high up in the homebuilding insurance industry who just bought an older condo for a higher price rather than a newer condo for a lesser price because of the risks associated with new construction.

I’ve heard from separate boardroom sources that the large construction companies are planning business models around repairs to the brand-new Smart buildings that have failed. We can be too clever, we can be too smart and too complex. We put too much faith in poorly executed buildings. Any serious builder should be using inexpensive, high-performing, long-lasting materials. We should be making houses that last at least a hundred years.

I had a professional contractor from France help me on my second hempcrete build and I said, “we’re doing some very quality work here.” And he said, “Not really.” He pointed out that we ran conduit through our walls for electrical wiring, but once we got into the rafters, our wiring was stapled as is common practice here. He said, “In a hundred years, you’re going to want to change your electrical wiring, and you’ll have to rip your ceiling down. That’s not very smart.” Our goal is to run full electrical conduit now. That comment to me has been a driving force of what we’re doing.

What’s next for Hempcrete Natural Building?

We’ve got an environmental solution to solve the housing supply problem on a big scale. In the next 24 months, we will be in position to start on a large development project that will incorporate grey water recuperation, all-natural materials, high-efficiency heating, proper design so we don’t need cooling. It will be a carbon-neutral development, 10 to 40 houses in total.

Our plan is to go to an area that needs housing and provide better quality for significantly less than a mainstream house. We’ve already proved this.

When we pull the forms off the hempcrete walls, the reaction is always the same – the workers or the  clients get this big grin on their face and they want to touch it. People don’t rush up to touch vinyl siding.