Generation Solar has been designing and installing photovoltaic systems in Ontario since 1988. 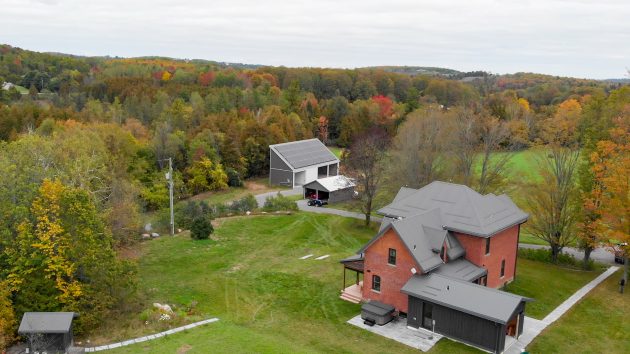 All photos courtesy of Generation Solar.

Generation Solar has been designing and installing photovoltaic systems in Ontario since 1998. Located in Peterborough, Ont., co-owners J.P. Pawliw and Simon Boone are engineers and some of the province’s brightest custom solar energy installers.

Boone and Pawliw sat down with Canadian Contractor to discuss their progressive build in Roseneath, Ont., which incorporates cutting edge alternative energy systems into a gorgeous rural century home.

How did this project originate and what did it entail?

The owners reached out to us. They had a ton of exciting ideas and wanted to explore many forms of renewable energy.

Their main priorities were the ability to offset energy consumption from the grid and also have backup power for when the grid goes down. They had a propane generator and also wanted it to be integrated into the system.

They have an old mill and mill pond on the property they were curious about generating power from. We explored that option, but it was a lot of work for a little gain. 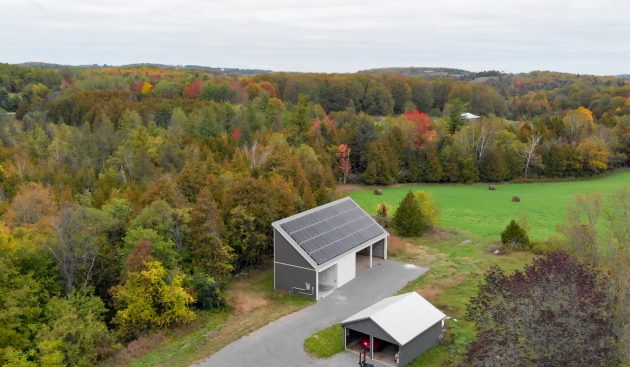 We solidified a plan that included a solar array and a battery backup. They had a drive shed that they tore down and replaced with one that was designed to accommodate solar. It has a monoslope roof to make maximal use of the footprint and get as much solar array as possible. The slope is optimized for solar gain and we were able to influence the truss design to ensure it would meet permit requirements from the start. You don’t get the chance to do that in a retrofit. We also ensured the equipment room was up to spec to accommodate the inverters, batteries, and EV chargers.

We installed a 20-kilowatt solar array, an 18kw inverter bank, and a 36kw-hour battery bank. Their 23kw propane generator is waiting in the wings to tie in.

The client was only allowed to export 10kw to the grid but the inverters can handle 18kw. This meant they could export the full 10kw and have eight kilowatts to supply loads. For instance, they’re charging the car and it might need five-kilowatts. They still have the ability to export 10kw and have a little leftover to power other loads around the house.

That was the challenge – we have a lot of generation power but we were limited on export. If we were in a different jurisdiction, we could export 20kw and the system is easier to program. Energy is political in Ontario, as it is anywhere in Canada and the rules change depending on who gets elected. Additionally, every jurisdiction has different rules so equipment needs to be flexible. It’s our job to ensure equipment is compliant in our jurisdiction.

Tell me about your clients. Are they environmentalists, people looking for economic benefit, or somewhere in between? 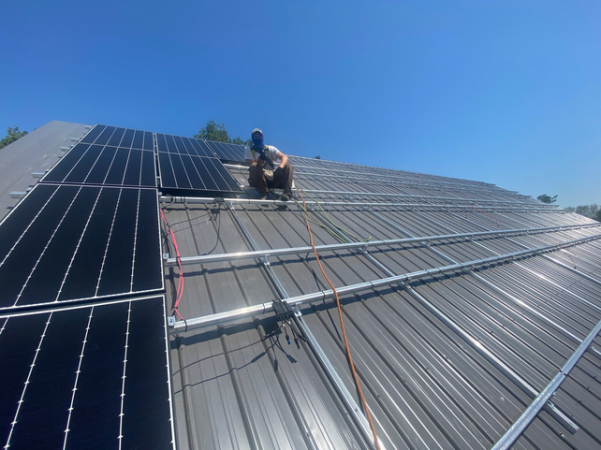 The MicroFit program in Ontario has been gone for several years now, so the idea of generating power with solar panels and selling it is a thing of the past. Now with net metering, you generate energy on your rooftop, and that is pushed into your home and offsets energy you would have otherwise purchased from the utility. Exported energy offsets consumption at night or other times when it’s not sunny. So in that context, yes, saving some money is part of the consideration our clients have for these systems.

Most of our clients have a very strong environmental interest. They want to reduce their consumption and load from the grid, and some are interested in reducing their reliance on nuclear power or other potentially non-renewable energy sources.

As an aside, the Ontario provincial government is proposing to bring back a number of natural gas plants to make up for the expected shortfall in the coming years as the nuclear plants go off line for refurbishments. The carbon footprint of our grid is actually going to go up in the next few years.

We’ve talked money and climate, but the third motivator is resiliency. Some people are quite concerned about the long-term reliability of the grid. As well, a greater number of people are relying on more energy-critical devices and they want those devices to be functioning and available to them, independent of the grid.

The service we provide is often part of a bigger picture. The clients in Roseneath are a good example. They’re putting in geothermal, they’re transitioning away from fossil fuels. They’re electrifying their life. They clearly have an interest in reducing their carbon footprint.

“Deep electrification” is the displacement of fossil fuels with electricity. People are replacing gas furnaces with geothermal, replacing gasoline-powered cars with EVs with the intent of reducing their carbon footprint and getting it all from electricity. Then you can produce that electricity using renewable energy.

These clients have made many other choices to make their home more energy-efficient; they’re using heating systems that don’t consume any fossil fuels; they’ve bought an electric tractor, electric lawnmower, an electric vehicle; and the last time I was there, they had a pair of electric bikes — we are just a part of all that.

How does the geothermal system fit together with solar energy?

Geothermal is a heating technology, just like a gas furnace – it’s a ground source heat pump. It uses more electricity than a gas furnace, but it uses far less electricity than an electric furnace. It displaces fossil fuels with electricity in one of the most efficient ways possible in terms of space conditioning. It’s more electrical demand, but we like that because it opens up the possibility for adding even more solar to meet that electrical demand.

What are some new or interesting technologies you’ve been using? 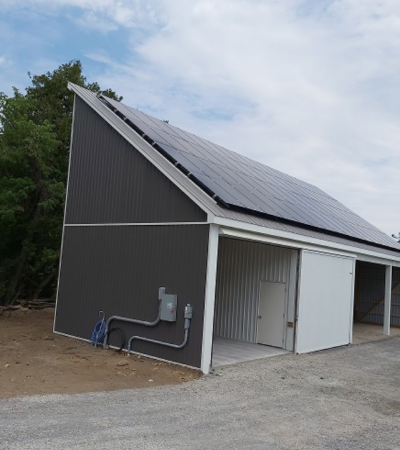 We included lithium batteries on this job. They are fairly new, but I would say they are the current technology. Most people are considering lithium batteries despite the price premium. Compared to older, lead acid batteries, lithium offers two to three times the lifespan and half the footprint. They are two to three times the cost, but a lithium power bank today should last 20 to 30 years.

One thing about lithium power banks is that they are not plug and play replacements for each other. They are a more customized solution and more complicated to design, like a puzzle. They can be a little more proprietary as well.

Take the Tesla Powerwall for instance – you cannot charge that from a generator, so that would not have been a suitable application for this project, because ultimately they wanted to be able to do that.

On this build, we elected to use an inverter that was battery agnostic, which would pair up with many different options.

How big is your company and how many projects a year do you complete?

We have around ten employees and we complete somewhere between 12 and 24 new builds per year. We also do a lot of upgrades; we will remove systems so the owner can replace their roof, and then reinstall it after the roof has been replaced. We do preventative maintenance calls, and we also do service calls when systems aren’t working properly.

Our target demographic is high-end residential clients. Most of the people we do business with are homeowners, but we install quite a few modules for commercial, agricultural and industrial clients as well.

When the Ontario government introduced the MicroFIT program in 2009 and started paying people to produce energy, (which they no longer do) did it create a gold-rush atmosphere in the industry? Like how you see vape shops everywhere now?

During the MicroFIT program there were a huge number of new companies and the vast majority of them are gone now. They didn’t create the structure or the foundations to keep going. The market got soft as well and couldn’t support that many, but ultimately many people cashed in and got out and left a legacy of problems behind them.

We have a very broad and deep set of skills for a small company. We have multiple interests and we go where those interests lead us, which steers towards adaptability. We also have deep roots within the industry. For instance, on the Roseneath build, when we needed the system to do something it wasn’t programmed to do, we called the manufacturer, discussed our issue with the engineer, and they tweaked the firmware to make it do what we needed it to do. We’ve been in the industry a long time and have a lot of great relationships with other companies – it’s collaborative – we’ll call each other up to sort out a problem. 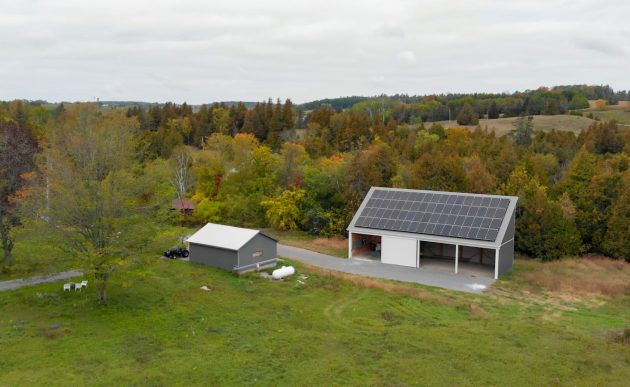 We have a wide variety of clients and a wide variety of goals. For instance there’s not much of a business case for buying an infrared inspection camera and all the rigorous training that comes with it. But we think it’s important and we did that and our clients appreciate it. Over time, the investments are paid off, but it’s not a financial decision.

We invest in training and equipment because it increases the diversity and resilience of our organization. There are many ways to run a business – the way we have chosen to run our business is based on a long term vision that puts relationships first. cc