Join us on a photo tour of Rome, Florence, Venice, and the Tuscan countryside

Anyone with even a passing interest in construction and architecture can’t help but be blown away by the magnificent, gorgeous structures built by the ancient Romans and then later during the Renaissance. So join us on a photo tour of Rome, Florence, Venice, and the Tuscan countryside.

Covering six acres of prime Roman real estate, the tiered seating area was originally shaded with awnings. At 50 metres high, it’s equivalent to a modern 16-storey building. The word “arena” is Latin for sand, a convenient floor covering to soak up all the blood and sweat from the gladiators. The sandcovered wooden floor could be removed and the arena flooded to stage naval battles. Much of the original metal and stone building materials were later pilfered and used in nearby medieval building projects, including churches and palaces. An earthquake in 1349 caused much of the southern wall to collapse. 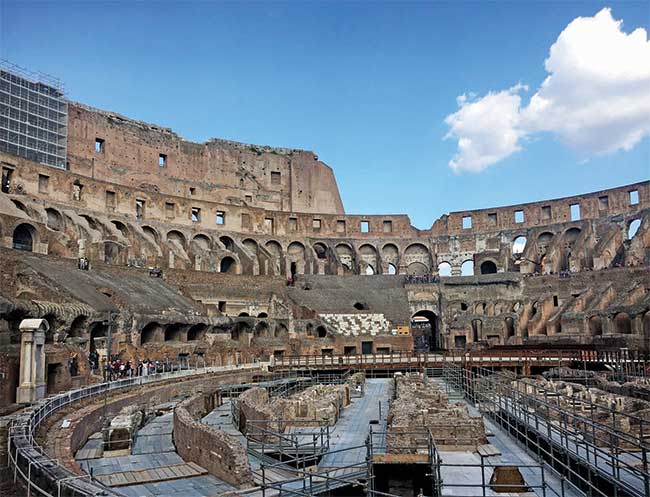 By far, one of the most imposing and impressive buildings in Rome has to be the Pantheon. Originally built as a Roman temple in 27 BC to honour all (“pan”) the gods (“theos”), it was rebuilt during the reign of Emperor Hadrian in 120 AD. The brick exterior shell is filled with poured concrete – a Roman invention. 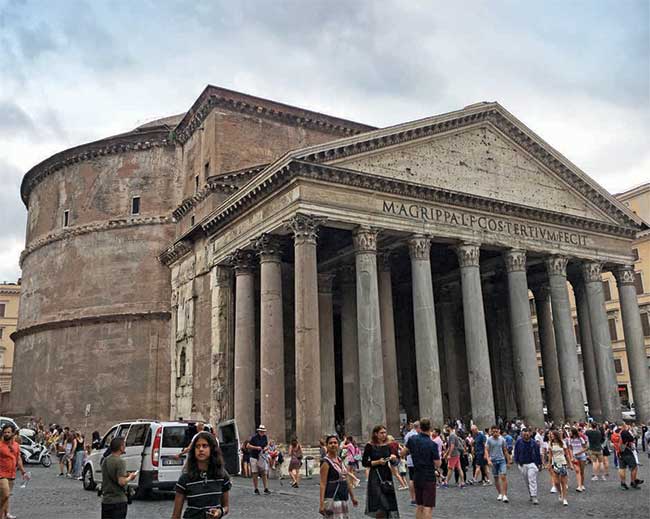 While the Vatican houses some of the world’s greatest art treasures – including Michelangelo’s The Creation of Adam as part of the Sistine Chapel’s ceiling – I was (pardon the pun) floored by the vibrant, three-dimensional effects on these ancient mosaics. 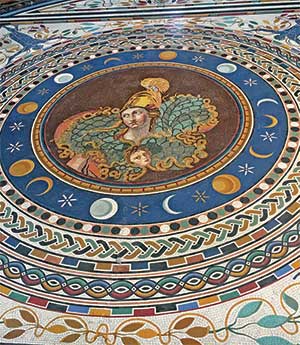 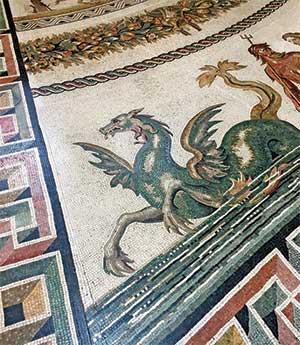 There are 13 Egyptian obelisks scattered around Rome, brought from Egypt by various Italian leaders over the centuries. They’re typically mounted on top of a sculpture or fountain, and capped with a Christian cross. This one, in Piazza del Minerva just behind the Pantheon, was erected by Pope Alexander VII in 1667. 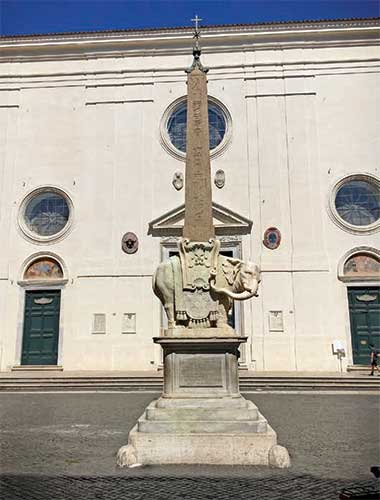 The jaw-dropping domed ceiling is precisely 142′-wide from side to side and 142′-high from floor to ceiling. At the base, the walls are a 20′-thick mix of concrete and stone. The ceiling is thinner, less than five-feet thick, and includes lightweight volcanic pumice in the mix. The 30′-diameter opening at the top, the “oculus,” is the building’s only natural light source. The floors are sloped down towards drain holes for rainy days. 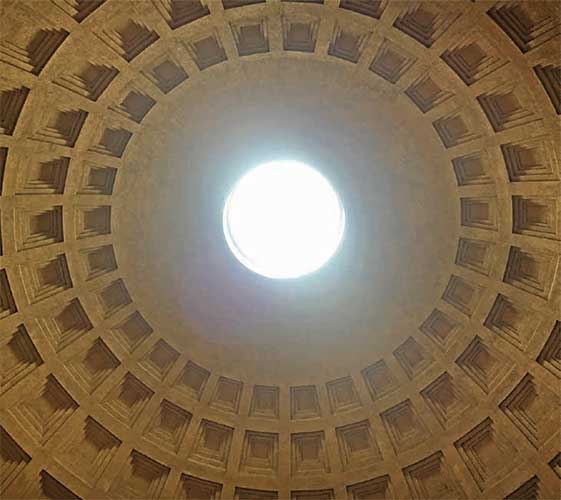 6) Basilica of Maxentius and Constantine

All that remains of the Basilica of Maxentius and Constantine today are three vaulted arches that formed the north end of an enormous building that was originally more than 300′-long and 200′-feet wide, with a ceiling more than 100′-high in the central knave. This government office is where homebuilders of the day would have lined up to apply for building permits. 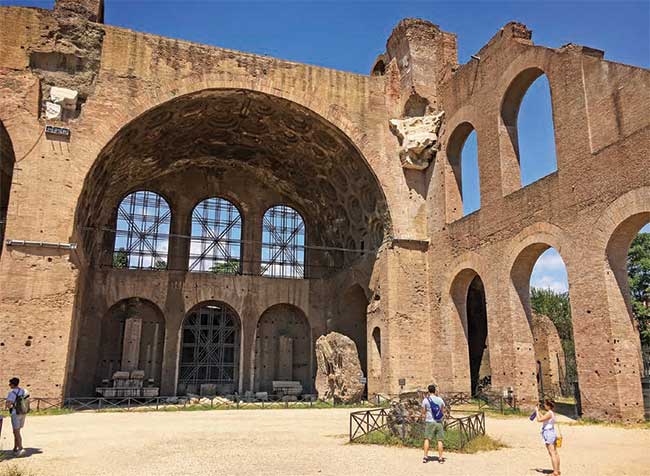 Of all the ancient marvels remaining around the world, the partially ruined Colosseum in Rome is probably the most instantly identifiable. Completed in 80 AD, it was originally known as the Flavian Amphitheatre. The stadium built for epic gladiator battles – and using early Christians as lion food – could hold up to 50,000 spectators. The more recognized name is thought to come from a colossal statue of Emperor Nero that once stood on the site. 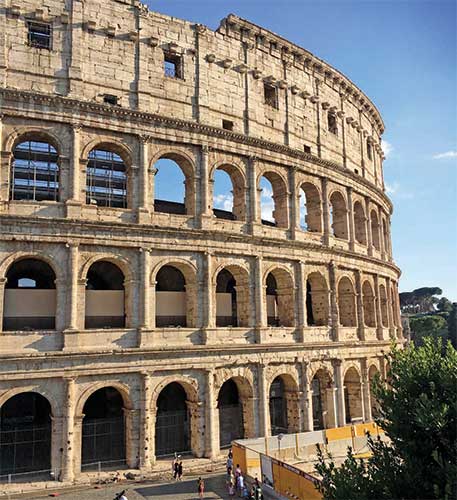 While under renovation, this Roman building – and many others undergoing repair – was draped in a screened hoarding harking back to the structure’s glory days. 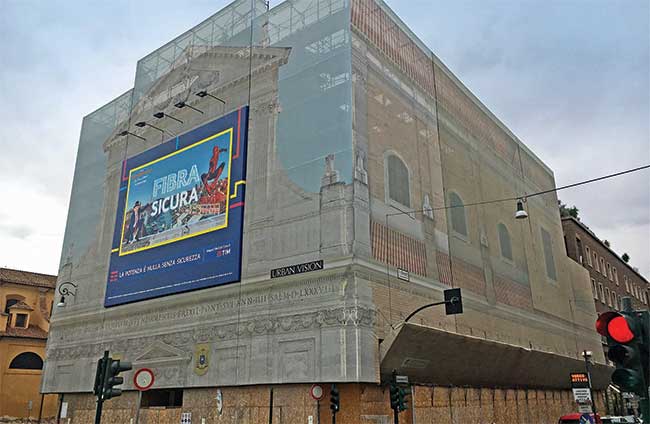 Our home base in Tuscany was Podera la Castellina, an agriturismo or farm property that rents out rooms. The building was first constructed as a convent in the 13th century. In 1504, the property was converted to a farm by a wealthy local family. At one point, the two-storey structure was used as a barn, with the farmers’ family living upstairs and the animals penned on the lower level. 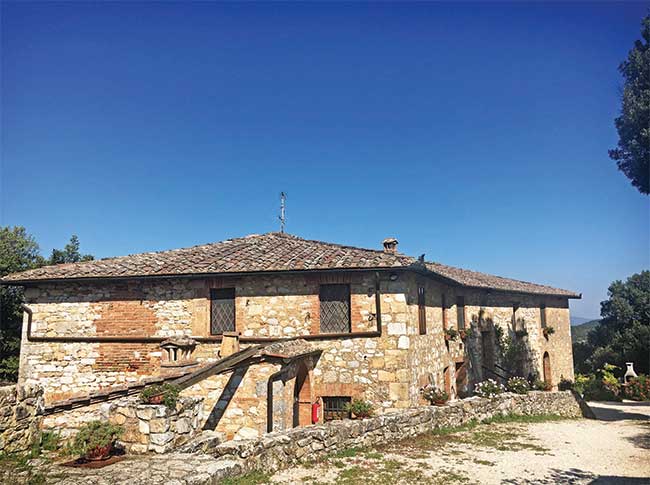 The Romans were the first to build a bridge at this narrow stretch of the Arno River, and there are records of several subsequent bridges built, then washed away by flooding over the centuries. The original Ponte Vecchio was built around 1000 AD. It’s somewhat unique in that it is lined with storefronts, housing butchers in medieval times, jewellers selling to well-heeled tourists today. 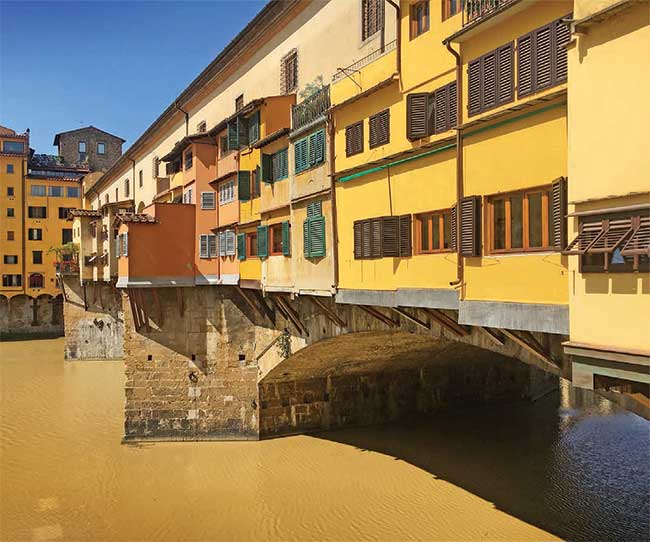 Of course Italy is literally littered with Roman ruins, including this theatre at the base of the wall around Voltera in the Pisa region. 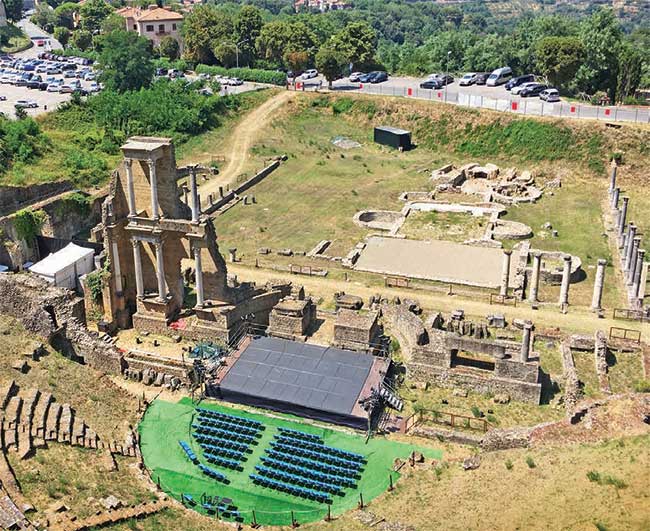 While the Vatican in the most-sought out church on an Italian holiday – though Vatican City is technically an independent City State wholly within Rome – there are countless other postcard-worthy churches to visit in the country, including the cathedral in Orvieto, constructed between 1290 and 1607. 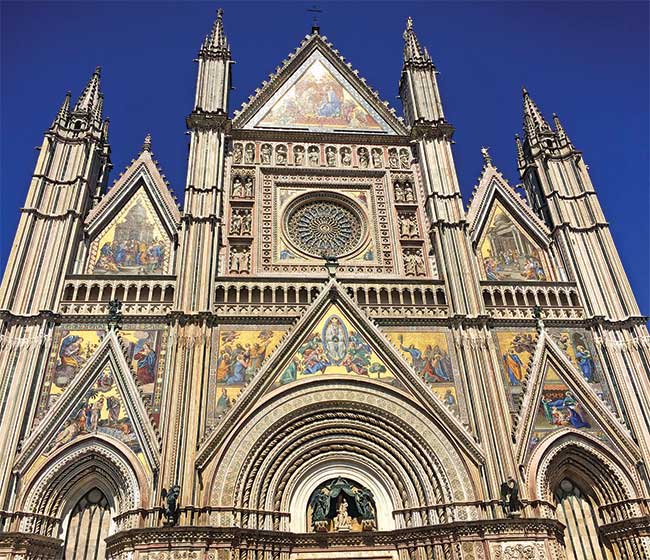 One of my favourite things to do when visiting olde European cities is to aimlessly wander along the narrow laneways. The only thing slowing you down is the urge to constantly stop and take photos. At the end of a T-junction in Siena, I looked right to see these charming stone archways, the left as I headed uphill under this exposed beam walkway. 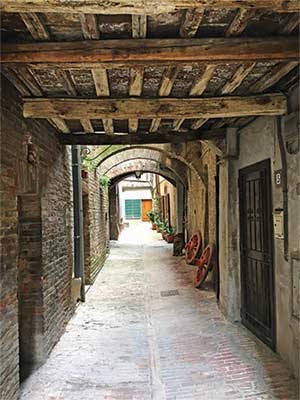 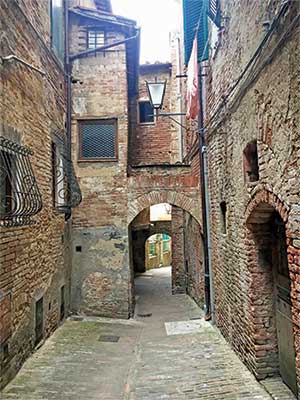 The cathedral in Florence, clad in green, pink, and white marble, is better known as the Duomo for its impressive domed ceiling. The dome’s architect, Filippo Brunelleschi, studied the Pantheon in Rome to understand how to cover the opening at the top of the church. 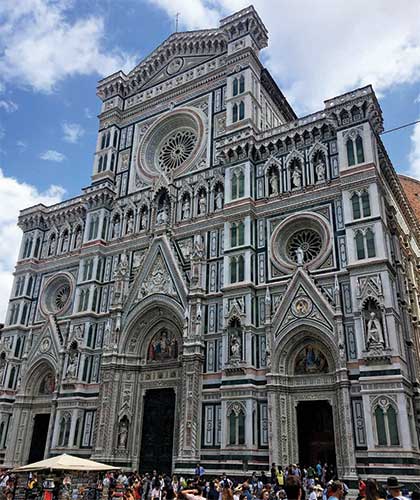 The Britnell-Malik family, posing in front of the Ponte Vecchio in Florence. The upper level includes part of passageway known as the Vasari Corridor that the powerful Medicis would use to cross the Arno from the Palazzo Vecchio to the Palazzo Pitti without having to mix with the peasants crossing the bridge. 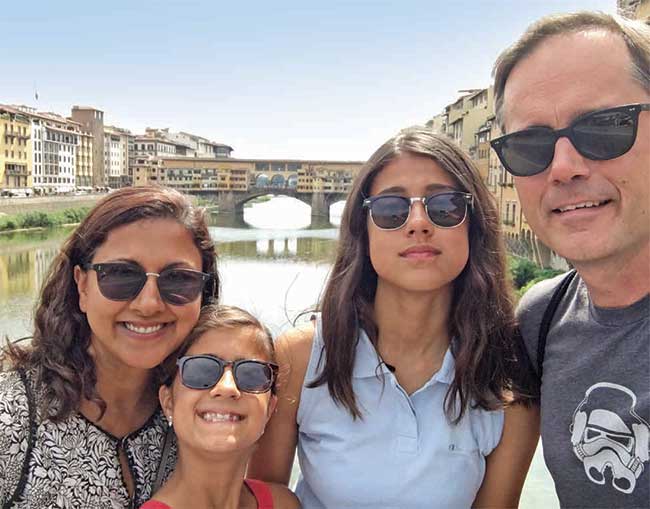 With no backyards to speak of in most Venetian homes, if you want a deck, you put it on the roof. While they look a little precarious, they’d certainly offer spectacular views. 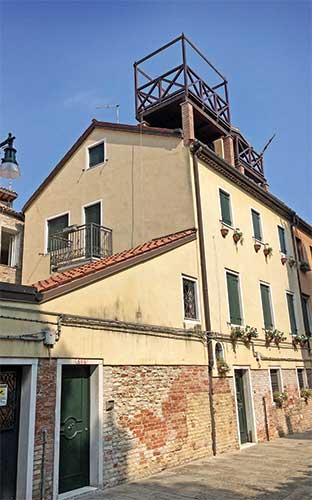 The Basilica di Santa Maria della Salute overlooks the eastern end of the Grand Canal. There are more than 170 Gothic, Baroque, Rococo, and Renaissance-era buildings lining the two-mile long canal, constructed between the 13th and 18th centuries. 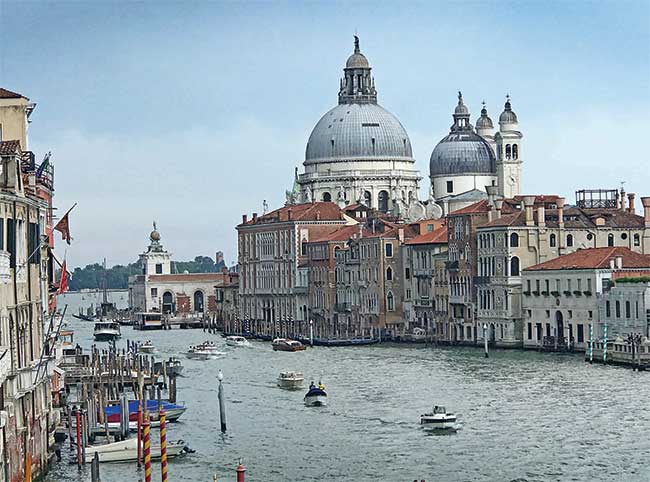 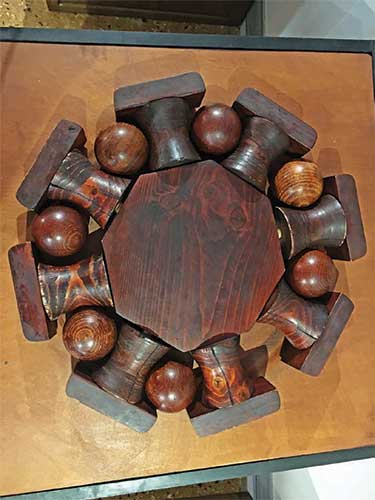 Yes, taking a gondola ride is a clichéd touristy thing to do. It’s also not cheap – about $120 for a half-hour tour. But you know what they say: When in Rome. Er, Venice. Travel tip: Avoid the traffic-clogged Grand Canal. Instead, find a gondolier who’ll serenade you on a route through some of the narrower waterways. 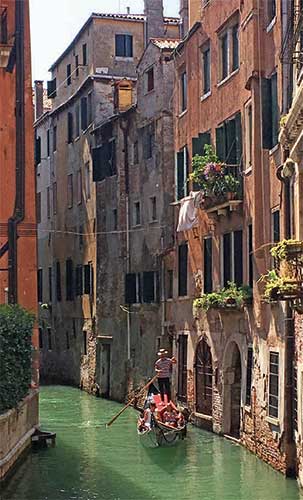 The Rialto Bridge is the oldest and most famous of four bridges that span the Grand Canal. The stone bridge was completed in 1591, permanently replacing earlier wooden structures. Today, it’s lined with shops catering to the hordes of tourists. 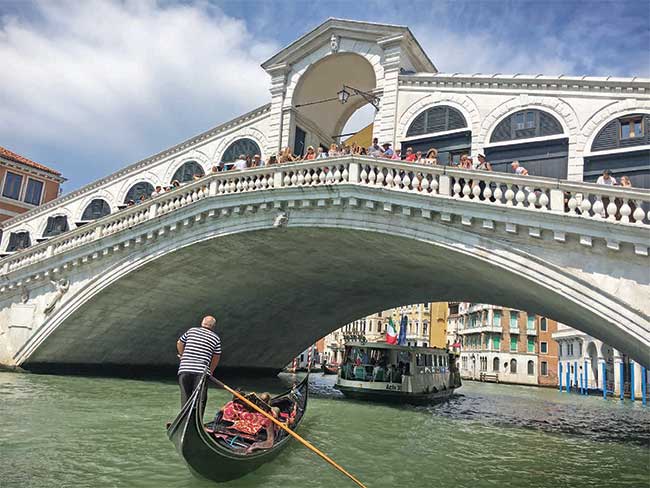 Electricity is prohibitively expense in Italy and only the largest palaces in Venice have enclosed yards, so clotheslines are strung across the narrow streets. 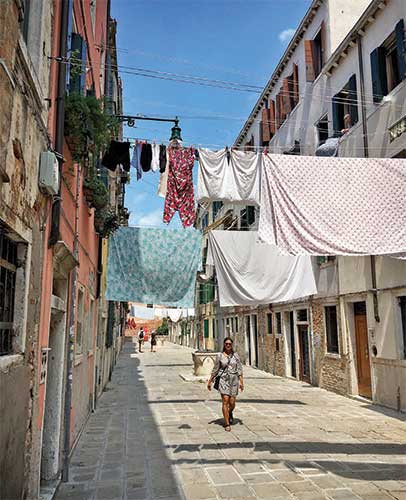 The Piazza San Marco, or St. Mark’s Square, covers about three acres, all built on top of wooden pilings driven deep into the soil below. It’s barely above sea level so the square is frequently flooded. The original bell tower collapsed in 1902, but was rebuilt 10 years later. 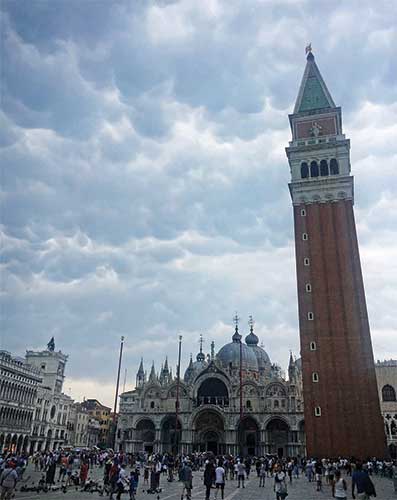 While Venice’s 118 islands are all linked by more than 400 bridges, everything has to be brought in – and out – of the city by boat, including garbage and recycling. The city has a fleet of floating buses for residents and tourists to get around. 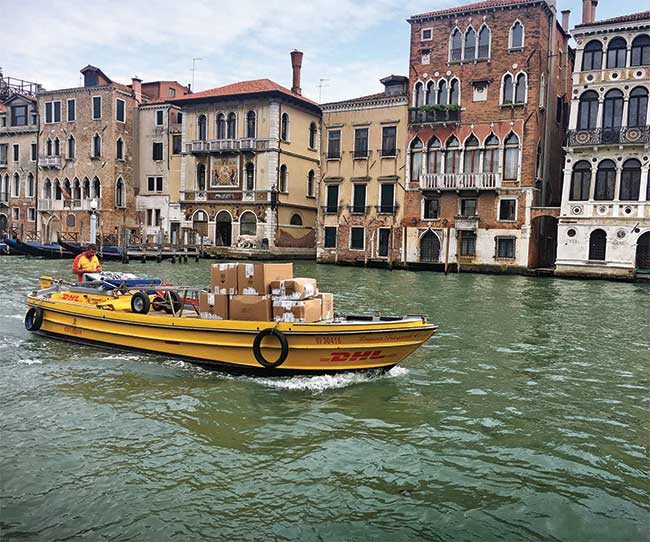 Related
The Venetian Building Scene
Celebrating exceptional architecture across the Prairies
Ontario recognizes excellence in wood architecture
CARAHS CONTEST: Spot ALL the safety hazards in this photo and you could win a $100 gas card