Negotiating stories to learn from

"One contractor we spoke to about this topic said it was tough to provide any tips because he's not the negotiating type anymore, for good reason"

The hurry up mistake

We recently heard a horror story from a contractor that certainly highlighted the need for ongoing negotiation on a project.

The contractor had begun a major renovation on a 150-year-old family farm house after setting a budgeted amount for the project. The job ran smoothly, but as they got close to the end, the owners kept adding items, and since they were so close to completion, the contractor kept saying ‘okay, we can do it, no problem.’ 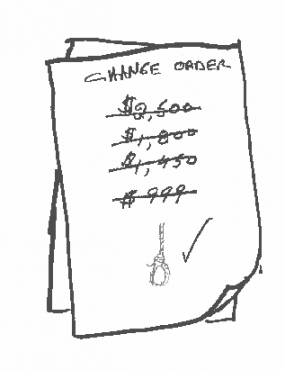 The contractor says he had personally developed what he thought was a friendship with the owner from working on the project from start to finish, but the project was $20,000 over the original price. When they sat down to discuss what happened, the owners were happy with everything — except the overage. The friendship promptly went out the window after the owner refused to pay the extra amount. The contractor said it wasn’t enough to seek legal counsel, so he considered it a $20,000 lesson in how not to do things.

The lesson here is to ensure that change orders are provided for anything out of scope on a project. Don’t assume the owner will settle things evenly after the fact.

The flipside is a success story of Barrett Risser owner of Lunenburg, Nova Scotia-based D. Risser’s Construction Ltd. He was interested in doing some work for a local shipbuilding company, but because other contractors had been working there before him, he figured it was a closed shop.

He set up a meeting with the person at the company in charge of building maintenance, asking for a chance to either get some work or bid on upcoming projects. After much back and forth, his company was awarded a small contract. Realizing the importance of this one project, they delivered on time and budget. A year later, D. Risser’s became the shipbuilder’s exclusive contractor.

“Time, price, quality — pick two,” he says to homeowners who want to expand the job beyond the original scope, alluding to the fact that, when things change, something has to give and that is not up for negotiation.

It’s a simple philosophy, but one that makes a lot of sense and should be heeded by all contractors. Not doing so is really inviting trouble.

Leaving no room for negotiation

David Litwiller of Calgary-based Litwiller Renovations & Custom Homes says he tends to interview his prospective clients over the phone, and then he’ll get into things more deeply when meeting on-site. “Sometimes I even discuss budgets over the phone because I can often get a ‘tell’ that they want a full bathroom, kitchen, flooring, etc. for $5,000 or $10,000,” Litwiller says. Obviously, this is a great way to separate realistic clients from the dreamers of the world.

He says that once they’ve completed an in-depth interview on-site and he’s decided they are a serious and viable customer, he builds a fairly complete and accurate cost estimate document reviewing over 120 aspects of the project.

Once that’s presented — in person — there’s little room for negotiating other than his markup. Litwiller says his markup has gone from 24 per cent a year ago to 26-to-28 per cent currently. He says he’s willing to bring that rate down depending on the job size and his interest in working with a particular client.

Litwiller adds that location of the project can also be a determining factor. If there is another project that is going to be active and it’s within 20 minutes of this one he says he’s much more interested.

He said he’ll negotiate markup to a point and if the client wants to get serious with him he’ll write up a Letter of Intent with a non-refundable deposit of around two per cent of the projected budget. Litwiller will then spend some money on plans, after which he said he’s able to put the project out to tender from trade partners.

Related
What was on contractors' minds in 2012: Our top 6 stories of the year
Our six most-popular stories of 2013: WSIB in Ontario and Mike Holmes interviews got the most views
Our most-viewed stories of 2014
Send us your stories about your client's neighbours trying to shut down your project