Perhaps roofers like this are smarter than the rest of us. Maybe they have friends in the business who can get them good deals on wheelchair ramps. Or caskets. 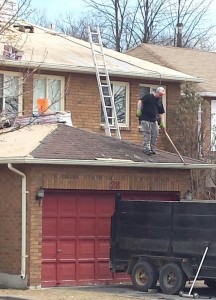 On April 2, the day after the arrival of the new Working at Heights Standard in Ontario, it was business as usual for one roofing company located in the GTA area (see pic, above). On this re-shingling job, safety was as scarce as finding a chicken with teeth.

Here’s the worker on the garage roof, not tied down. The new regulation relating to this, where a worker is exposed to falling from a height of more than 3 meters (approx. 9.9 feet), states that they must be connected to a fall arrest system consisting of a full body harness with adequate attachment points and a lanyard equipped with a shock absorber or similar device. (O. Reg. 145/00, s. 14)

Within minutes this worker climbed an extension ladder to the upper roof and joined his two worker mates, who were also not tied down. One worker was even observed working at the gutter’s edge, where one false move could mean a 1.5 second fall to the ground, either badly injured or dead.

On the plus side, one safety item was correct: their ladder did extended 3 feet above the landing surface, however the downside was that their ladder was not secured top and bottom to prevent movement as required under O. Reg. 213/91, s. 80 regulation.

Had I been a Ministry of Labour (MOL) inspector observing this, it may have played out like this:

Three workers would be fined for not being tied off to a personal fall protection system (with harness, lanyards, rope grabs, lifelines and anchor points) at a price-tag of $295 (plus 25% victim surcharge) totaling $1,106 or $369.00 for each worker.

Adding these two fines together would mean each worker would have to dig in to their pockets and pay $612. TO put it simply, they worked for nothing that day!! They were working hard to earn a meager income, yet it could have been easily lost by fines. All due to their employers failure to protect their safety!

Other safety violations that could have lead to even further fines include:

Related Stories
How one roofing firm advertised their serious stupidity
BC inspectors cracking down hard
Ontario new "working at heights" standard stalled
It's a no brainer: wear CSA-approved hard hats only!