Concrete Facts – Building with ICF is different but offers benefits

Get to know insulated concrete form construction, which is gaining popularity in residential builds across the country. 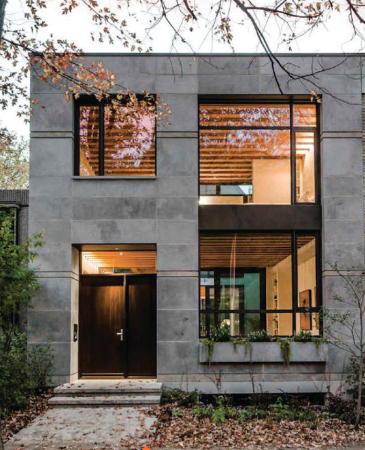 As you read this, many insulated concrete form homes are going up across Canada, in addition to many ICF multi-level residential and commercial buildings, garages and barns. This type of construction is now gaining significant momentum for the first time since its arrival in Canada in the early 1950s. And you may be surprised to learn that Ontario has the highest density of ICF adoption in the world, according to Douglas Bennion, building science and code compliance specialist at B.C.-based ICF manufacturer, Airfoam Industries. Bennion also serves on the board of directors at ICFMA, the Insulating Concrete Forms Manufacturers Association, and chairs its technical committee.

To describe this construction method, let’s start with the ICF units. They have “teeth” on the bottom and grooves on the top that fit together as they’re stacked row on row, with the two vertical panels linked together with interconnecting web materials. The hollow in between the panels is filled with steel-reinforced concrete. It’s an airtight and strong building envelope that’s fire, sound and storm-resistant.

In terms of the costs, the materials for ICF versus conventional building are quite similar right now due to the pandemic spike in lumber prices, and it’s expected that as ICF becomes more popular, it will become much less expensive. There’s now a myriad of companies that make the forms (and accessories, such as rigid foam window bucks), so competition should drive down prices as well.

ICF is also very energy efficient. The two layers of ICF insulation, combined with the concrete core, provide enormous savings for heating and cooling. The ICFMA outlines several reasons why ICFs are able to help achieve net-zero homes and other buildings: “ICFs maintain a stable R-Value of at least R-23, and are an inherent air and moisture barrier that does not degrade or get easily damaged. ICFs act like a thermal battery and use their stored energy to resist temperature changes outside of the structure. The combination of these properties means that the energy used to heat or cool a structure stays inside.” Basements are insulated already in an ICF home, which also significantly boosts the building’s heat retention.

Adoption and evolution
Sephton Spence first used ICF about eight years ago and has completed about 15 custom homes so far through his Toronto-based company, Kubbie Construction. Spence is also vice-president of the Afro-Canadian Contractors Association.

Right now, Spence estimates that about three per cent of homes in the Toronto area are built using ICF. “But I think that after COVID, when ICF will be presented at trade shows, it will get a lot more visibility,” he says. “At the shows, they need to let people see the efficiency rating and the comparison of heating costs to handle the forms. It must be presented well.” 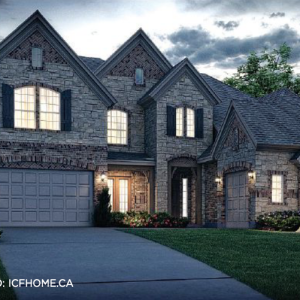 Spence says the forms have changed quite a bit over the years and in several ways. (He uses more than one brand, and they’re similar in price and otherwise, but his client makes the decision.) “There’s more availability and their R factor is higher, with even higher R-value coming,” Spence explains. “The forms are a little smaller now and also easier to use. They always locked well, but now it’s a tighter seal. The meshing mechanisms are faster to use. What’s most impressive is that we can order forms for a house now with almost no wastage. With a conventionally-built home, you have a lot of waste. With ICF, we’re down to three or four percent waste now and it’s going to be nothing soon.”

Overall change in approach
In terms of overall difference in approaching the building of an ICF home versus a conventional envelope, Spence first points to the right mindset. “If you are not a strategic thinker and can’t see ahead, this type of construction is not for you,” he says. “It allows you move so many times quicker, so you have to be coordinated. Once you know what you’re doing, you’re able to pour a 3,000-square-foot home and can have it framed in a day and a half. The electrician doesn’t have to drill through studs and can work while the plumber is doing that work.” Because of the speed, ICF home construction translates into higher profits. “Right now, the home cost is comparable, but it’s finished three months earlier,” says Spence. “That’s huge.” He also notes that because ICF homes are so tightly built, mould is a concern, and energy recovery or heat recovery ventilators are required. He adds that the rule of thumb is at least 10 percent glass to wall ratio, and recommends “not too much” fixed glass.

Both Spence and Rob Vandenbroek, owner of Vandenbroek Construction in Walton, Ont., note that the biggest consideration in building an ICF home is to work with experts until you know your way. “Work with an experienced architect and installer from conception,” says Vandenbroek. “You almost need to be a hybrid builder, as ICF is basically concrete and carpentry combined. I think home builders should find a qualified ICF installer and start a long relationship working together to make great homes.”

With regard to electrical installation in ICF, one OEL member (Ontario Electrical League, the voice of Ontario’s independent electric contractors) says it takes longer and requires more wire for wall installation compared to conventional buildings. It’s also hard to protect wires from damage by the wall screws. He’s found the fastest way to fasten wire to ICF wall is to use a foam gun. 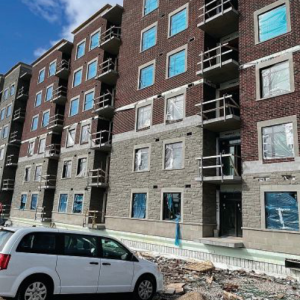 Kody Horvey, owner of Up to Kode in Red Deer Alta., says that “regardless of your exterior cladding system, you still need a drainage plane with flashing, drip caps and proper water shed to manage water and allow it to exit from behind your cladding.” Horvey has done both flush and recessed window installation into ICF buildings, but tends to do more flush outside installation because it’s faster (and more economical for the building owner). Bennion adds, “our research indicates that flush mount windows in ICF are less reliable in terms of leakage. The installation is also more complex if you want it to resist water, and therefore not necessarily less expensive.”

For more
In 2019, the BC Housing Research Centre’s Building Envelope Guide for Houses – Part 9 was released with agreatly-expanded section on ICF construction, from footings to trusses. The guide is a collaboration between industry experts, design professionals and government. It’s available for download online at bchousing.org.