Beating the realities of winter is one of the challenges you face as a Canadian contractor, and things can get especially tricky when it comes to plumbing. Entire regions of this country don’t necessarily have the soil cover to protect water supply pipes and drain lines from freezing year-round. I’ve wrestled with shallow-soil building situations since the mid-1980s, I’ve tried a number of different approaches, and some of the best freeze-protection plumbing solutions I’ve found come from a small Canadian company in the land of rocks and trees.

Lorne Heise started out as an electrician, but after he and his wife Robin left the bustle of Toronto to live in the soil-poor, cottage-rich region of Muskoka, Ontario, they founded a company called Heat-Line (www.heatline.com; 800-584-4944). I first tracked Lorne down in 2011, following stories I’d heard about his water line freeze protection products installed around the world. You’ve probably never met anyone who gets as excited as Lorne does about the quintessential wintertime challenge of keeping pipes ice-free. Imagine spending a good part of each week inventing solutions for efficiently heating pipes! That’s Lorne’s life and he’s good at it.

When it comes to keeping pipes from freezing, water supplies and drain lines are two different animals. The risks of freezing are unique and so are the solutions. Both situations rely on electric heating cables, but the similarities end there. 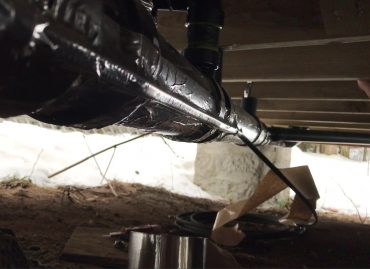 As long as a drain pipe is sloped consistently and drains completely it might never get blocked with ice, even if it’s fully exposed underneath a raised building or buried by insufficient soil to keep the pipe above 0oC. But hope can be a dangerous thing when it comes to plumbing. If a blockage develops during winter in an otherwise reliable pipe, or frost builds up enough to clog the flow, it’s bad news. A 4-inch sewer line frozen solid with “ice” might not defrost until the robins have been back for weeks in most parts of Canada. And if something this ugly happens on one of your projects, you’ll look about as good as the stuff clogging your client’s sewer line.

So how do you make sure drain lines never freeze when you don’t have enough soil? It comes down to electric heating cables and there are two options: external and internal. Until recently, external was the only choice for drains because plumbing codes prohibit any electric cable from being located inside a drain pipe. The danger that code authorities are concerned about is the remote chance of an explosion caused by a spark surrounded by volatile sewer gases. External application of heating cable also side- steps the chance of pipe blockage caused by sewage debris grabbing onto an internal cable and building up, but there are factors to be considered when installing an external cable. Besides the fact that the external approach is difficult to install around buried drain pipes, the transfer of heat to frozen water is inhibited by the pipe wall. 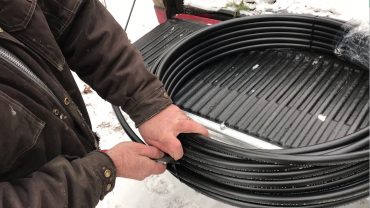 Earlier this winter I installed two types of drain line heating cables. One fastens to the outside of a fully exposed insulated pipe underneath a building on raised piers, and the other sits inside a buried drain pipe. Heat-Line is unique in the world of heat trace systems because they have the only system that is cCSAus approved for use inside black and grey water drains. Their Retro-DWS system I installed includes a self-regulating heating cable that’s sealed inside a 1/2” diameter HDPE pipe. Technically speaking the cable is not inside a drain line, it’s inside a pipe that’s inside a drain line. This makes it okay for cCSAus certifications. 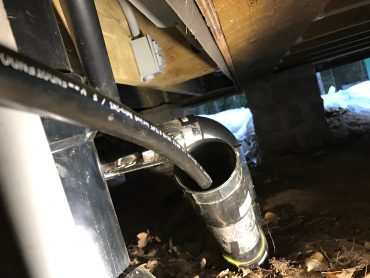 Another handy feature of the in-pipe approach is that you can push the heating cable a long way. You don’t need to fish it. In my own situation I easily pushed the pipe 130 feet from the building to a septic tank through a 4” PVC pipe. I’ve heard of situations where Retro-DWS was pushed a whopping 400 feet by hand without buckling. 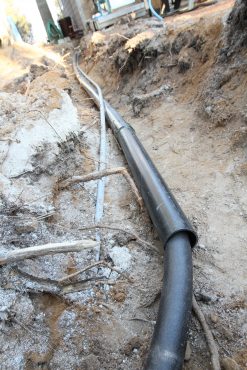 There are many ways to keep water supply lines from freezing when they can’t be buried below the frost line, but the trick is making it all happen reliably and with minimal electricity use. The first time I installed a Heat- Line product for one of my projects was back in 2011. The situation involved a 55-foot run from a drilled well on a site with about 12” of stony soil above bedrock and I used a product called CARAPACE. It’s a 200 PSI high density polyethylene pipe with a self-regulating heating cable molded into one side.

In this case “self-regulating” means the heating cable increases heat output as needed in areas that are cold. One location on the cable may be drawing very little power because it’s naturally warm, while a colder section may be drawing more to prevent the pipe in that section from freezing. Coupled with a thermostat system that turns the entire system OFF when pipe temperatures rise above freezing and you have very frugal use of electricity.

The installation I put in included preformed foam pipe insulation around the water supply line, all encased in a 4” ABS pipe for physical protection. Where the water line turns upwards and goes vertical as it entered this particular home built on piers, I replaced the preformed foam sleeve with spray foam insulation injected into 3/8” holes in the ABS. I couldn’t make the curve inside the ABS with the sleeve insulation, but the spray foam injection did the trick. With the thermostat sensor located inside the coldest part of the installation (the vertical part above ground), the electricity switches ON less than half the time, even in the coldest weather.

Your projects only succeed as well as the weakest link performs, and frozen plumbing systems can cause no end of headaches. To see the job where I installed both the internal and external drain pipe heating cables, visit www.baileylineroad.com/freeze-proof-drains.


Related Stories
Keeping pipes outside of a cottage flowing in winter: Option 2
Why go through 9,000 hours of apprenticeship if a bum off the street can make the same money?
Before the drywall is installed: 10 things to discuss with your clients
How shallow an actual home inspection really is