A second-storey addition to this home in the west end of Toronto toppled over in high winds. Luckily, no one was injured.

When you edit of a couple of magazines for the renovation and custom homebuilding industry (Renovation Contractor and Building Excellence), a news item about a house collapsing during construction catches your eye. When that collapse happens just a few minutes from your own home, you pay very close attention.

Lean on me: A second-storey addition to this home in the west end of Toronto toppled over in high winds. Luckily, no one was injured.

Back in February, a detached house in the west end of Toronto imploded, coming to rest partially on the two neighbouring homes. The house was vacant at the time, but there were actually two workers inside when it started to fall. Witnesses described loud cracking noises and windows shattering. An employee of the construction company who was outside yelled to the two colleagues inside, who fled moments before the collapse.

There were high winds at the time, with Environment Canada recording gusts up to 60 km/h. 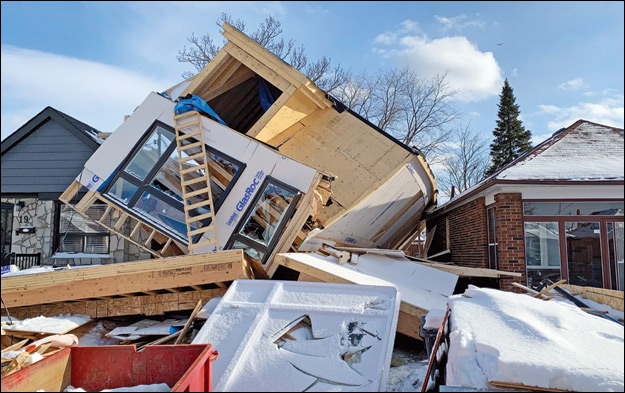 We reached out to the city’s building department for comment but, unfortunately, Covid-19 was already becoming a preoccupation. The media relations person shared this brief statement.

“Toronto Building issued a building permit for the construction that was underway at 21 Homeview Avenue, which included a second-floor addition to the existing house. The Building Inspector last conducted an inspection on January 10, 2020. At that time, work was progressing in accordance with the approved plans and framing was underway; however, not complete. The Building Inspector received no further inspection requests since the January 10, 2020 inspection.”

The occupants of the two neighouring homes were temporarily evacuated. A week later the collapsed building was razed to the ground. Once the current situation settles down, we’ll follow up with the city and share the results of their investigation in a future issue.