The Canadian Real Estate Association now forecasts a decline in national home price and purchases in 2023, with a turnaround going into 2024. 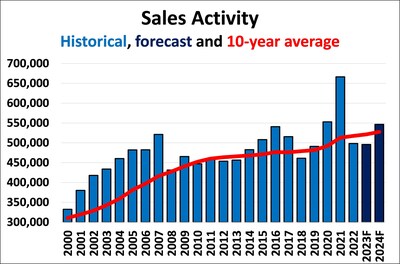 “It’s important to note that based on the monthly data under the surface, that decline has already happened over the course in 2022; however, the record setting start to that year will be reflected as a decline this year as prices are not expected to be anywhere near those record levels in 2023,” reads a press release from the CREA.

Housing prices are still mixed across Canada, but on a province basis, the association reports that prices have mostly cooled from their peaks in markets within Ontario and British Columbia. Home prices in Alberta, Saskatchewan and Newfoundland and Labrador have held steady, according to the report, while Quebec and the Maritime provinces land in between.

The association predicts it will likely remain quite difficult for many first-time buyers to enter the housing market until mortgage rates are lower than they are today. Yet, the association expects some buyers to come off the sidelines once they have more certainty that rates have topped out.