Lorne Figley, a working plumber in Saskatoon, turns 93 on Jan. 22. And he has no intention of retiring.

A Canadian has landed in the Guinness World Records as the oldest actively employed plumber. And at 92 years old, Lorne Figley of Saskatoon, SK has no intention of laying down his wrench any time soon.

It was Figley’s daughter, Tricia Koob, who filed the application with the Guinness organization. She started gathering background information in October 2015, thinking she would be able to surprise him last Christmas.

“What do you get a 92-year-old man who has everything?” asks Koob, adding, “I truly believe my dad is an absolutely amazing man.”

The application process turned into a significant project requiring invoices and testimonials from clients to prove Figley was a working plumber. “It was quite a journey,” she says, but it was a journey that ended this past September, almost a year after she began, when her father’s world record status was confirmed. 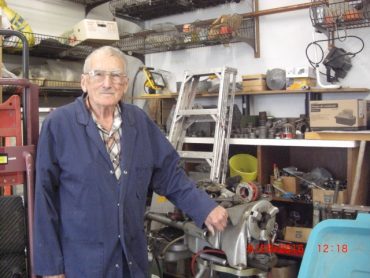 Figley’s plumbing career began in Saskatoon after he returned home from World War II, where he served with the Canadian forces in Holland. He completed his sheet metal apprenticeship in 1947, and then together with three other young men started up a business in 1951, Broadway Heating Ltd.

In the following years Figley completed additional Red Seal certifications in steam fitting/pipe fitting, plumbing, refrigeration and air conditioning. He later bought out his partners and has run the business since. For a short while in the 70s he put the business on hold and went up to the Northwest Territories, but he returned to Saskatoon to resurrect Broadway Heating and he has been at it non stop.

Figley told the Guinness World Record folks that he hasn’t retired because he likes to keep busy. And Koob confirms that in late November as the colder weather was approaching he was out every day doing service calls.

Upon receiving confirmation of the record from Guinness, Koob contacted the local media and Saskatchewan Polytechnic in Saskatoon, of which Figley is an alumnus. “It was a real story here in Saskatoon for about a month and a half,” she says, “Poor old dad, he was just exhausted.”

Saskatchewan Polytechnic presented Figley with a lifetime achievement award and also created a $500 apprenticeship scholarship award in his name, presented to the student with the highest grade in the plumbing apprentice final exam. Figley has also offered up his own award for the top student in the sheet metal apprenticeship program.

“He’s humbled and tickled pink,” say Koob. “He’s had a big grin on his face.”

And Figley still has no plans on retiring. As he said to the Guinness World Record group: “Working helps keep my body fit and my brain sharp. I hope to die with a pipe wrench in my hand.”

Figley turns 93 on January 22, 2017, and together with his daughter he will keep his paperwork in order and keep his world record secure.

Doug Picklyk was a contributing editor to HPAC Magazine (where this article first appeared) before joining Canadian Consulting Engineer magazine as editor.

Related
This plumber I once worked with used to brag that he was arrested for drinking and driving and as a result required a chaperone to drive him to calls for a year or so.
J.A.B.A. Construction, Saskatoon, in ‘white knight’ renovation rescue
Why go through 9,000 hours of apprenticeship if a bum off the street can make the same money?
She retires from a long career at Saskatoon renovation firm, then loses home and everything else in High River flood