Ask Damon about the origins of his passionate interest in things military and he’ll tell you about his childhood. “I come by it naturally,” he told Canadian Contractor. “I had two great uncles in the Second World War and remember my grandmother sitting me, going through the pictures of her brothers in their uniforms, and how proud she was. I think that’s where my passion really started.” It continued as Damon grew up in a small town near Ottawa. “You’re surrounded by veterans, surrounded by monuments. You develop massive respect.” 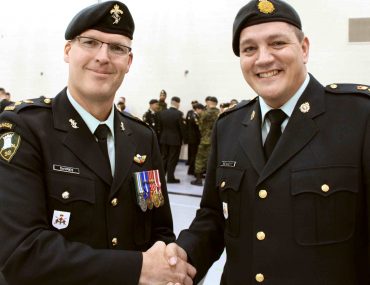 A continued commitment of time and energy to help the men and women in service
Nowadays, Damon uses his connections and his endless enthusiasm to assist the military in ways that mean a lot to the men and women who serves our country. For years prior he has vigorously spoken up for military vets looking to enter the construction industry as a career path after service or while on reserve.

Last summer, Damon volunteered his time, project coordination skills, and numerous supplier contacts to lead the reconstruction of a little-used social space at the 8 Wing Base at CFB Trenton, transforming it into an all-ranks pub.

Damon’s well-publicized dedication to the men and women in service led to his nomination and selection as an Honorary Lieutenant Colonel with the 32 Service Battalion based at Downsview ON. He was formally welcomed to the Battalion in a regimental ceremony last week, complete with soldiers on parade, troop inspection, bagpipes, and the signing of scrolls.

“One of the best things that have happened in my world”
“It’s one of the biggest honors I’ve ever had in my life,” Damon told Canadian Contractor. “It’s kind of the culmination of how much I’ve tried to help, how hard I’ve tried to help veterans and those on active duty, a pat on the back for everything I’ve done in the past. It’s one of the best things that could have happened in my world, almost like winning the lottery, because now that I have a uniform and a title I can help a lot more from within.”

A blue collar worker in an honorary role is as unusual as it is logical
Damon acknowledges that a blue-collar worker like him appointed to such a position is somewhat unusual. Yet from the Battalion’s perspective, it makes a lot of sense. While Honorary Colonel Hari Panday, whom Damon joins with the Battalion, is a well-connected veteran of the Canadian financial services industry, Damon’s connection is with the workers on construction sites and of course their employers. That makes for a complimentary duo as far as Battalion command is concerned, a blue-collar connection that is important to the Forces.

“In parallel with Hari Panday, Damon is a wonderful fit,” Lieutenant Colonel David DeVries told Canadian Contractor. “We have an ability to reach out through Hari Panday in his sector and now Damon’s with his, so we have a wider exposure. That’s really what the Honoraries do; they help give us exposure to what our Battalion does and especially to what our soldiers do. Damon’s going to be able to bring a very visible presence to the Battalion, a greater reach than we’ve had before. He’s able to reach out in to the community to promote a different perspective regarding the benefits of our soldiers who are technicians, craftsmen, who are blue-collar workers themselves, and show how they can help other organizations.”

Military vets are ideal work site employees believes Bennett
Damon has nothing but praise for the intelligence, resourcefulness and discipline of military personnel on the job site after they’ve left the service. To him, they embody everything a contractor could ask for in an employee. “They’re awesome. When they’re back in a group attitude, they just blossom. They’re hard working, they’re intent on learning, they’re diligent and polite; they’re everything you could ask for, and that’s because they were soldiers.”

Watching the Battalion’s hour-long ceremony unfold, one could see that Honorary Lieutenant Colonel Bennett was standing tall and proud, eager to give even more of his own time to a cause that has meant so much to him for so many years.