Vadim Kazenelson was in charge of the jobsite when four workers plunged to their deaths when a swing stage broke in half at a Toronto apartment building on Christmas Eve 2009. Evidence showed he knew the workers were not tied off. 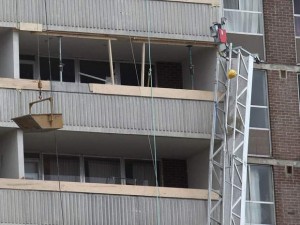 Vadim Kazenelson, the project manager for Metron Construction, was sentenced earlier today to 3-1/2 years in jail for his role in the Toronto swing stage tragedy which took the lives of four workers and seriously injured a fifth on Christmas Eve 2009.

His sentencing was the first of its kind in Ontario and sends a warning to every employer, to protect the safety of their onsite workers.

In handing down the sentence, MacDonnell said that Kazenelson had “decided it was in the company’s interest” to allow his men to work in “manifestly dangerous conditions.” Indeed, Kazenelson had a close view of the untied-down nature of his crew. He was in fact handing tools to his men when the swingstage broke in two. Kazenelson managed to cling onto the 13th floor balcony as the other men plunged.

Ontario Federation of Labour (OFL) president Chris Buckley lauded the jail sentence. “Bosses cannot expect that it’s all about money,” he said. “Families have been destroyed here. This is not just about profits any longer. This is about the health and safety of workers.”

The OFL launched its “Kill a Worker, Go to Jail” campaign as part of the fallout from the tragedy.  “The OFL won’t stop campaigning until the employers who put workers lives at risk to earn another buck find themselves doing hard time in jail,” Buckley said.

Millions of dollars in fines have been previously handed out to others found guilty in this case, including the prosecution in 2015 of the company who hired out the swing stage. It was found the welding on the platform was not up to standards.

The collapse caused huge change in Ontario, with the Ontario MOL launching a construction blitz of 2,800 sites in 90 days, closing around 784 sites. Their results found widespread violations of provincial regulations re: guardrails, scaffolding, fall protection systems, worker training and records, ladder use and many other issues.

This disaster became the catalyst to the MOL launching the new Working at Heights Standard (details) that came in to effect on April 1, 2015.

The MOL (Ontario) continues to sends its message out, more recently with its Zero Tolerance directive to its inspectors in November 2015. This affects all individuals found violating the Occupational Health and Safety Act in commercial, industrial and residential construction projects.

Kazenelson is appealing his conviction and is out on bail.