The Canadian Apprenticeship Forum has an ‘Action Plan for Employers’ to repair the disconnect that often exists in Canada between contractor employers and the country’s Aboriginals. Given the forecast shortage of trade workers over the next ten years due to retirements and overall growth in sectors like house construction, employers looking to expand with new, young workers should take a look.

This is relevant to all of Canada but particularly true in Central Canada, where high Aboriginal unemployment exists. Those construction and contracting companies willing to reach out to Aboriginal youth are regularly surprised by their eagerness to find meaningful employment and long-term careers in the industry.

Industry must make the first move
It’s not always an easy step for employers to take, given some unfortunate stereotyping. The CAF Action Plan feels the initiative has to come from industry. “Establishing support from senior company leaders and front-line staff is an important first step. If leaders set the tone and support partnership-building and Aboriginal hires, other staff will embrace diversity as well.” Cultural awareness workshops for management are also suggested.

Keeping an open mind and taking time to familiarise oneself with the desires and concerns of the young Aboriginal population is key. Like any program promoting apprenticeship possibilities, creating awareness at the high school level is a great place to start. Young people, Aboriginal or not, are well aware of the need to find a career after graduation, and are interested in not only wages but employer expectations and opportunities for further training.

A matter of mutual understanding
It’s a two-way communication. Attending job fairs and pow-wows are important not only for promoting apprenticeship trade opportunities but for company managers to learn about the community where potential apprentices come from. Also important is showing young Aboriginals the future potential that exists via an apprenticeship program. The CAF encourages new thinking. “Create posters that show someone working and the statement ‘this could be you’ and/or posters where team work and mentoring are emphasized.”

Starting young: Provincial Skills Camps for Aboriginal youth
The much-maligned Ontario College of Trades in fact offers programs within its training mandate that focus on Aboriginal youth. Two being currently offered are multi-day summer camps, one rotating through various locations in the province, the other at Georgian College in Barrie. The ‘Skills Work! Summer Camp program has youngster 12 to 14 years old exploring careers in skilled trades through interactive games, industry tours and entrepreneurship programs.

Last year Saskatchewan initiated their Aboriginal Apprenticeship ‘Right’ program, matching Aboriginal workers with employers willing to train them as apprentices. Businesses across the province have proven eager to provide the training, role models and mentorship to new apprentices entering the trades. “Over 30 designated trades in the province will be experiencing shortages of skilled workers,” said Doug Elliot of Sask Trends Monitor in a 2015 release.“Providing skills training to local populations including Aboriginal youth is a smart long term investment.” 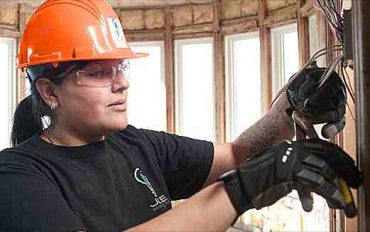 Success stories abound
There are challenges when hiring any young person to their first trade job. In the case of aboriginal apprentices, there is a culture shift away from seasonal work. As one Manitoba construction company owner told the Daily Commercial News, “The problem was not unwillingness to work, rather it was unfamiliarity with the ‘9-to-5’ work culture. There’s a difference between the traditional work ethics and the mainstream work ethics.” However, this is relatively quick and easy to overcome, he continued. “Once they understood the concept and the transition from traditional work ethics into mainstream construction they caught on pretty quick. They understood that this project is going to be not just a short-term thing but a long-time thing, a long-term career.”

The satisfaction of success is palatable amongst companies who have taken the available program guidance and successful experience of others to heart, as expressed by this company owner: “I guess I am very passionate about it because, first of all, I believe it the right thing to do. A big motivator is we are so short of people within our industry. And what’s a bigger resource of people than Aboriginal people?”