CASE STUDY: What Would You Do? Help this contractor and you could win a DeWalt XR Dual Speed cordless framing nailer

This “What Would You Do?” case study is printed in the May/June 2015 issue of Canadian Contractor, page 58.

Send us your best answer to the contractor’s dilemma, and you could win a DEWALT XR DUAL SPEED cordless framing nailer, with a suggested retail price of $549.  See the possible correct answers down below.

Buster Belichek, although very rich, was the kind of customer you looked forward to seeing the back of. Brigham Wild, Best Build Renovations, was three-quarters of the way through a massive reno on Belichek’s house and was heartily sick of the stress and the abuse. Belichek had ridden him so hard, and been so obviously dishonest, that Brigham wondered if he would even collect the rest of his money. He was still owed half the project fee.

Then, Brigham stood in stunned silence as Belichek handed him a list of make-goods (as Belichek called them) on the work so far and an ultimatum: Brigham was to complete the list to Belichek’s satisfaction before continuing the work or he could pick up the dumpster in the driveway, pack up his team and leave. And get sued.

Complying with Belichek’s demands would assure a net loss on the $150,000 renovation. Walking away would mean getting sued and losing even more money. But then, as if by miracle, a third option presented itself.

Earlier that day, Brigham had come in alone to prep a second round of demolition. He tore away some drywall from a chase to check the mechanicals. Behind the drywall he discovered a large cash box and inside the cash box were hundreds, possibly thousands of fifty-dollar bills, 1950s-style, clearly hidden decades before Belichek bought the place. Brigham stopped counting at $77,500 with barely half the pile done.

Yes, Brigham knew the law: the money belonged to Belichek. But he was also being plainly ripped off and bullied by his client. And the found money was unknown to Belichek.

What would you do if you were Brigham?

Email the number that matches your best answer, with your comments, to rkoci@canadiancontractor.ca. Please title your email “What Would You Do.” We will select the answer that impresses us the most and send the winner the DEWALT nailer below… 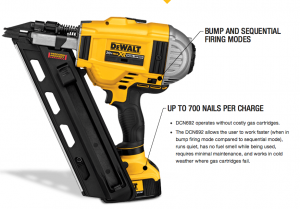 
Related Stories
Win a DEWALT Dual Speed cordless framing nailer!
Case Study: Help a roofer and you could win a $100 gas card
Tell us “What Would You Do?” and you might win a DeWalt cordless mitre saw
Virginia court case involving online defamation of contractor yields split decision

5 Comments » for CASE STUDY: What Would You Do? Help this contractor and you could win a DeWalt XR Dual Speed cordless framing nailer