Reports that the U.S. Environmental Protection Agency (EPA) is initiating a civil and criminal investigation of Home Depot concerning the company’s compliance with lead safety work practices should send a few shudders up the backs of Canadian contractors too. According to Health Canada, a home “probably contains lead-based paint if it was built before 1960. If built between 1960 and 1990, the exterior may contain lead-based paint. The paint on interior surfaces may also contain lead in smaller amounts that could still be harmful, especially to young children.”

The risk is real
Renovation of older homes is a huge part of the Canadian residential contracting scene. Chances are most contractors have worked on homes or commercial buildings with lead paint. Not only are lead dust, chips and residue a risk to occupants, it can also put the workers at risk. “Workers may carry lead-containing dust home on clothes, footwear, skin or hair, thereby increasing secondary exposure to themselves and potentially exposing family members to lead,” says the Environmental Abatement Council of Canada.

“It was kind of a scary situation”
The Home Depot incident involves a series of complaints across the United States. One specific case made public by local news media in Atlanta, Georgia concerned a couple with young children who had purchased 17 replacement windows at the big box giant. They hired Home Depot to install them as part of the sale. The home was tested and found positive for lead paint. An extra fee was charged for appropriate remediation measures. Those measures were never put in place.

According to local media reports, the husband became suspicious when he saw the workers without any special equipment. “He had gone upstairs to see if they were putting plastic down and if they were wearing masks and, you know what, they weren’t,” the wife said. In one room, windows with lead paint had been removed and placed on a bed. Pictures were taken of workers without masks.

Subsequent testing by a professional found lead dust particles in a number of rooms, including lead dust on a child’s crib. “It was kind of a scary situation,” the wife told local media. Although the homeowners accepted a settlement from Home Depot, both the company and the installer were fined by the Occupational and Health Safety Administration about six months later. Home Depot has been fined in other cases too, including $37,000 federal fine resulting from a similar case in Colorado. 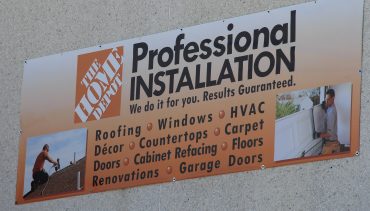 Could what happened in the U.S. happen here too?
Canadian Contractor attempted to contact Home Depot Canada to learn how the company deals with the stringent federal and provincial regulations regarding the handling of lead residue in this country. The company did not respond to our requests. Lowe’s Canada did respond however, and sent us a copy of their ‘Vendors Code of Conduct’. It states: “Vendors must fully comply with all applicable national and/or local laws and regulations and Lowe’s policies…Vendors shall provide all workers with a safe work environment and provide all workers with appropriate personal protective equipment and workplace health and safety information and training.”

In terms of active compliance supervision, Valérie Gonzalo, Media Relations representative for Lowe’s Canada told Canadian Contractor that “territory managers and regional directors have to follow-up and insure full compliance to laws, regulations, standards and contractual requirements on any work done on our behalf.”

Are you trained to recognize, test and handle old lead paint?
Big box outlets aside, the same questions need to be asked of all contractors large and small concerning their ability to correctly and safely deal with dangerous contaminants like lead paint. Neil Damackine, President of Construction ND in Montreal, offers qualified remediation as an ongoing part of his contracting business. However, he questions if larger retailers explain the issue properly to customers. “I’m not convinced a hardware store wanting to maximize market penetration for their products would be happy explaining why it’s necessary to seal contaminated work zones, install decontamination showers and create safe zones inside the home of a client who just purchased an installation service to effortlessly beautify their home,” he says.

“Lead like asbestos requires some training to recognize which materials pose a threat and require testing before disturbing,” Damackine says. “Qualifying the materials contamination requires sampling by a specially trained contractor, IEP or in the case of lead paint, a properly conducted onsite test. But most installers on a deadline aren’t thinking about that. Because the protocol for lead paint decontamination scales proportionately to placement and coverage, there’s similar personal protection equipment and decontamination procedures which require specialized equipment not found in a consumer hardware store.”

Do you need to learn more?
In addition to federal mandates, every province in the land has protocols and regulations regarding the safe handling of old lead paint issued through their respective Health and Occupational Health ministries. If you aren’t familiar with the regulations in your province now, you are well advised to get familiar. Your customers and your workers are counting on it.