Things that go bump in the night (that shouldn’t!)

It’s a relief that my house isn’t collapsing, but still…

Contributing Editor John Bleasby chronicled the construction of his new house in 24 weekly installments back in 2014 while acting as his own contractor. Like any homeowner/builder, he now looks back at what he might have done differently, especially when he hears loud bangs in the middle of the night.

There is some relief to learn that we are not alone. There are others like my wife and I across Canada, awakened in the middle of a cold winter night by what sounds like a shotgun going off somewhere above our heads. It’s always the same, around 3 or 4 in the morning, when the night is coldest and the temperature drops to -15 C.

Yes, our house barks at us. During the first winter, we thought maybe the 24-inch deep, gang-nailed trusses that span our flat roof were simply settling in or perhaps drying out a bit. Maybe that was perfectly normal for a new house. And why would we know differently? We had never owned a brand new house before. However, we are now in our fourth winter and the banging continues. We can’t put it down to settling in. We also ask ourselves, “Why would a house that’s ICF to the roof, essentially built of concrete and rebar, need to ‘settle in’?” The good news is that there is no visual evidence of any cracks or structural issues anywhere. But it still bothers us. 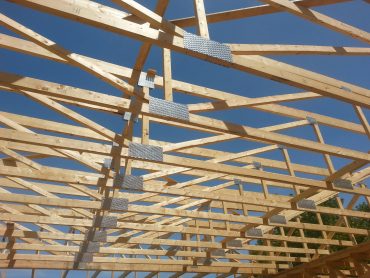 Roof banging is not uncommon
Some expert opinion was needed. My first call was to the engineer at the truss manufacturer who had designed our roof system. He claimed he had never heard of this before. That wasn’t helpful. Then I called my roofer. He’s become a trusted resource for me when I am researching anything to do with roofing. He’s thoroughly professional and very knowledgeable.

“Don’t worry, John,” he told me. “My roof does the same. In fact, lots of commercial roofs crack and bang, and not only flat roofs. It’s just physics. Different materials contract in cold weather at different rates. Pressure builds to a point that there has to be a release. That’s all. Anyway, there‘s nothing you can do about it. You’d be wasting your money.”

On-line research came up with much the same. An article in the Winnipeg Free Press caught my eye, in answer to a question that could have been mine exactly. “We have a flat roof and the loud cracks in certain times during the winter months are very scary. Is there something that can be done?” The expert’s answer expanded (bad pun) on my roofing friend’s answer to me. “The simple explanation for what is occurring in your home can be attributed to thermal expansion and contraction,” wrote Ari Marantz. “Your home is made up of various individual building materials that are held together with various fasteners and adhesives… susceptible to slight movements due to their fastening methods. When the temperature inside or outside changes dramatically in a short period of time, significant shrinking or expanding can occur…. The cracks or bangs you are hearing are the manifestation of this sudden release, which just as quickly abates, as the pressure suddenly drops.” 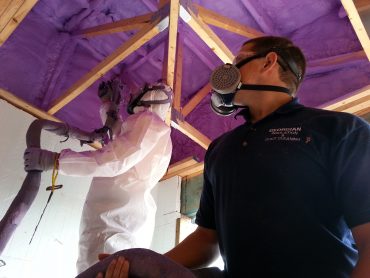 Spray foam insulation is applied to the underside of the plywood roof deck
(photo: John Bleasby)

Dramatic drops in temperatures are a shock to the materials and their fasteners
We can relate to the weather changes. The sun can beat down on our roof during the day, but at night when the temperature plunges, the surface temperature of the roof likely drops dramatically too. However, it didn’t make us feel totally comfortable. We wanted to know more. “It’s physics, but it is not an indication of a serious structural problem,” says hunker.com. “Sleep soundly, despite the racket. The noises associated with thermal expansion and contraction of building materials in homes rarely is a sign of any serious problems, except for the disturbances caused by the loud sounds… The noises may appear to be emanating from the roof or attic, but may have the source in that location or anywhere in the structure,” hunker.com continues.  “The sound is likely amplified by the large space in the attic. The difficulty is in determining the area that is actually causing the cracking noises. “

Does snow act as insulation?
However, there is one more curious aspect to the bangs above our heads. Unlike older homes that experience banging and cracking due to insufficient insulation, our home is extremely well insulated. There’s some 6 inches of spray foam covering the underside of the deck. However, above the plywood roof deck itself is just the TP60 waterproof covering. Should we have requested a layer of foam board insulation above the roof deck before the TP60 was installed? After all, that’s the way most commercial flat roofs are insulated — It’s called the “Warm Roof” installation.

The reason we wonder is this; when there is a layer of snow on our roof, there are no banging sounds at all no matter how low the temperature drops. Are we correct in thinking that the snow is acting as a layer of insulation?My roofing friend says not likely — we could have banging noises even with a warm roof. He feels that perhaps the weight of the snow itself is preventing the materials from shifting.

My wife and I are not sure about that, but we’d certainly welcome more expert opinion.
What do you think?

Related
Should a bathroom fan in Ontario be vented through the roof or through the fascia?
Ice Dams: Coming this winter to a roof near you
The right materials for flat and low-sloped roofs
The Road to NZE (Part Two): Defeating thermal bridging

2 Comments » for Things that go bump in the night (that shouldn’t!)