Accidental deaths of workers in Ontario remain roughly the same, year after year. Yet the WSIB's claim payouts on injuries have plummeted, as the WSIB argues it has created a culture of safety. How can the deaths stay the same and the injuries plummet? Simple claims denial, says Sid Ryan. 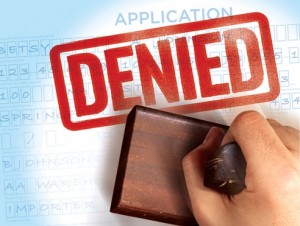 It seems that Ontario’s WSIB has erased 1,150 deaths from their records in the last nine years.

Recently, Sid Ryan of the Ontario Federation of Labour (OFL) accused the worker’s comp agency of covering up 1,150 work-related fatalities over a nine-year period.

According to a recent report by Global News, Ryan said, “Every one of the 1,150 fallen workers who have been scrubbed from the WSIB spreadsheets is a real person with a real spouse, real children, real friends and real colleagues.”

The overpaid president of WSIB Ontario, David Marshall, who was hired during the former Dalton McGuinty government, has incurred a growing ground swell of resentment by the province’s injured workers. They say that one of the ways Marshall has been cutting the WSIB’s massive unfunded liability (money it owes in the future but has no method of paying out of its own assets) is to denying many legitimate claims – or cut them down substantially.

For his deficit cutting, Marshall got a $400,000 bonus – as a thank you from the government, basically – earlier this year.

It’s sad that the WSIB seems to be treating many legitimate claimants badly in the name of reducing billions off the WSIB unfunded liability. Because that debt (which is what it really is) was accrued by gross mismanagement of the WSIB over the years.

Ryan rightly speaks out about this government agency and its claims slashing. Deaths, unfortunately, have remained level the last 30 years (see chart) but with a little simple math, you can see that Ryan is right. 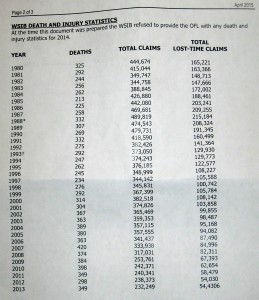 How can the total WSIB claims be reduced to their lowest in 2013 while deaths remain level? Deaths are the barometer, the tip of the iceberg and, mathematically, when deaths go up or down, total claims should align with them.

Why would total claims go down to their lowest in 30 years in 2013? Its called claims denial by WSIB to reduce debt, which then causes hardship and misery to many claimants and their families. These are real people, like you and I.

Despite what you hear, or what WSIB is telling you, total claims have NOT been reducing due to the improvement of safety training or awareness, but simply due to the arrival of Marshall and his, I would argue, unethical ways of balancing the books.

To make matters worse, on January 1st, 2013, Bill 119 was introduced in Ontario, which forced the self-employed into WSIB. Imagine paying into WSIB only to find your workplace injury claim denied.

Simply put, WSIB is a badly run government insurance company that needs to be reviewed. I think maybe it’s time this job was tendered out to private insurance companies. What do you think? Do you have experience dealing with WSIB?

By providing education and training, CARAHS reduces your risk of fines, job site closures and prosecution under the Ontario Occupational Health and Safety Act.


Related Stories
Ontario WSIB’s $400,000-a-year CEO David Marshall gets another two years at the trough
The new rules for WSIB in Ontario
OFL president Sid Ryan explains what his union organization has done with the WSIB’s $12.3 million funding
The sorry tale of yet another legitimate WSIB claimant denied benefits