Not only is Richard Speare a successful contractor, he’s also eager to share his knowledge and expertise with the next generation of carpenters. 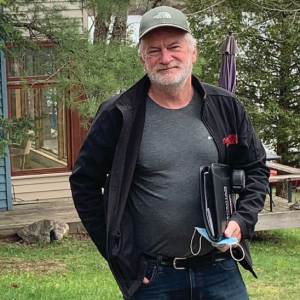 Richard Speare, president of Barrie, Ont.,-based Speare Construction and Contracting, got into the construction business by accident, but he’s glad he made the jump. After finishing high school in 1978, Speare started working for Ontario Hydro as an electrical operator. His career path took him into management positions where he learned how to oversee projects and manage people — skills that he would put to good use years later when running his own company.

His career in the utility sector ended in 1993 when Speare decided that sitting behind a desk was not what he wanted to do for the rest of his life. He took the severance package he was offered, and soon after accepted his brother’s invitation to help build a house in the Muskokas (cottage country for many who live in the Greater Toronto Area).

Transition into the tradesThat build with his brother turned out to be one of many to come. The siblings built several custom homes together until Speare started his own company in 1995.

“I think my transition to ownership was natural,” he says, “since I like meeting people and finding solutions to people’s perceived needs. My previous jobs helped with the planning aspects of construction, and although I really enjoy working with my hands, I think I am better at the management side of things.”

Speare is thankful for the many years he spent working for a major utility, prior to starting his own construction business. That experience helped him hone the business and management skills that have allowed him to succeed where others have failed.

“I think someone might consider themselves a builder, but if they don’t follow good business practices, they won’t be successful,” he explains. The need to balance business skills with carpentry skills is good advice for those already in the trade, but even better advice for the next generation of carpenters and contractors. It’s the kind of advice Speare is happy to share with students at his part-time teaching job. 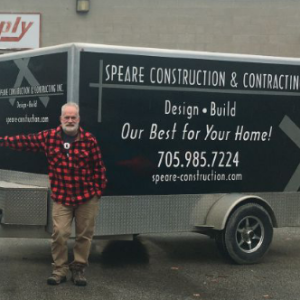 In fact, when he’s not on the job, Speare is in a classroom at Georgian College in Bracebridge, Ont., teaching the trade to tomorrow’s carpenters. His penchant for business and his love of carpentry has him juggling two careers: running a business full-time, and teaching carpentry part-time.

“I’ve been teaching since 2011,” he explains, “and I enjoy it very much. I’ve even hired a few of my students. The college program is a great well for good employees.”

Juggling two careers isn’t easy and Speare says that the only reason he can do so successfully is because of his very supportive team, which includes his brother and his sister, who handle much of the administrative responsibilities that keep the company humming along smoothly, even when Speare is at the college with his students.

He enjoys teaching so much, in fact, that Speare says he can see himself retiring from his business in the future, while continuing to teach carpentry and shaping the skills and minds of future contractors.

“I plan to transition ownership of this company in a number of years,” Speare adds, “and then probably continue working on maybe a consulting basis. But the teaching — that I could conceivably continue doing as long as they want me.”

Having taught now for more than a decade, Speare says he’s seen a few interesting trends. “For one,” he says, “we’re seeing more women interested in carpentry. They’re still a minority, but they fit in very well and they’re very capable.”

The other trend is students who are increasingly tech-savvy, which Speare says is a good trend for the trades. “I think we’re seeing more technology in carpentry and construction,” he adds, “and it will help them to do well in this business.”

Skilled labour shortageThe shortage of skilled labour, and of individuals willing to give the trades a chance, is well known here in Canada. It’s a problem that has continued to worsen in recent decades. As older individuals reach retirement age and hang up their hammers in order to enjoy more time with their grandchildren, the question for our industry is, who will take over and where will tomorrow’s trade professionals come from?

Speare, however, says he is seeing a change in attitudes that gives him hope for the future. “While there’s still a bit of a stigma when it comes to the trades,” he admits, “I’m seeing a growing number of students who already took college or university courses and then had a summer job in construction where they ended up loving it enough to completely change their career path.”

Another encouraging trend is the way high schools view the trades. Speare says he’s seeing teachers and counsellors promoting the trades as a serious career possibility; painting the trades in a more positive light than they used to in the past when the trades were promoted to those who weren’t “book smart.” This is a refreshing new direction that offers us more reasons for hope that new talent is in the pipeline for the future.

Preferred contractor statusWhen he’s not teaching, Speare is out in the real world running his business and caring for his customers’ needs. His attention to details and his genuine interest in others has earned him a “preferred contractor” status with the agencies that hire his company to care for a variety of projects, including those in the health-care sector, as well as people with special needs. “We’re always getting high praise for the professionalism and the quality of the work my guys do,” he adds.

The foray into healthcare and special-needs projects has seen Speare and his team work with organizations like the March ofDimes and the Salvation Army to help those with accessibility challenges, and to undertake construction projects with clinicsand hospitals.

Speare has managed to carve out a niche for his company as the go-to contractor when homeowners have accessibility issues, and when they need walk-in tubs or zero-threshold showers or ramps that allow someone with limited ability to avoid a flight of stairs. He’s even worked on projects where elevators were needed. “We didn’t install the elevator,” he explains, “but we did all the carpentry work associated with it.”

He says that his customers want to avoid an institutional look when converting their existing bathrooms to something that’s more accessible. Speare is proud of the way he and his team can cater to that need by renovating the space to be fully accessible, as well as completely eye-pleasing.

“One of our customers had an elevator installed in their house so that they could access the basement,” Speare recalls. “We also built a beautiful big bathroom in the basement with a roll-in shower. That was one our more memorable projects.” 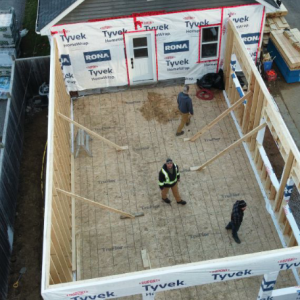 Speare’s genuine concern for his customers and his attention to detail have earned him a loyal following. His customers keep calling him back, sometimes years later, because they want him to take on other projects. One of these customers was a couple who contracted Speare to renovate their cottage in 2013. After working with the architect and starting some of the preliminary work, Speare soon realized that he couldn’t proceed with the project as planned. The cottage would have to be demolished.

“We got partway into the project and realized that the cottage was not salvageable,” Speare recalls. “We had to knock it down, and that really seemed to dash the hopes and dreams of that couple. I remember them being in tears when they heard the news.”

But Speare and his team managed to put a smile on the couple’s faces after replacing the old cottage with a new high-efficiency home. What appeared to be a shattered dream, turned out to be the couple’s dream home.

“They were thrilled with the work,” Speare says. “They were so glad that they had to replace the cottage after all. In fact, they recently called us back to build them a sunroom. The whole project shows really nicely and I think this is one of the builds that we’re most proud of. It’s our pride and joy.”

Glass half fullWhen asked about how he feels about the future of carpentry and of our industry in general, Speare is optimistic. “I would like to see the introduction to trades re-introduced into the public school system. I don’t think that exists presently and I know it used to. I am encouraged by the attention the high school systems are giving to the trades and the technical courses they offer. I think there’s a bright future ahead for our industry.”