When it comes to sustainable building, ‘Everything that’s old is new again!’

While Canada can pride itself for a number of green home building initiatives, we often look elsewhere for truly creative ideas. Europe, for example, is a leader in green technologies and recycling, and it’s obvious why: Lots of people and not so much space.

When you live in a heavily populated and developed region as Europe, you have to be clever about the material you use and how you dispose or re-use them. Canada can learn from the European experience.

We can also be inspired by ideas spawned in developing countries, where plastic waste can be transformed from a serious environmental hazard into much-needed housing for the poor.

Sometimes, we can look back in time and find an ancient building technique that can be updated and made attractive and practical with the addition of modern technology. Here are three examples: 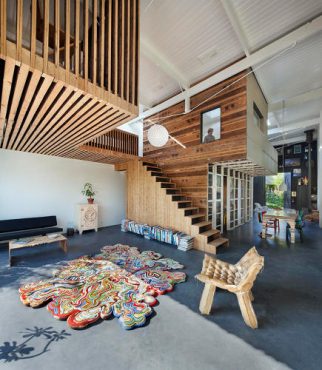 The architect’s own remodeled coach house (‘House of Rolf’) is built entirely from materials from a demolished building next door, including the furniture!

Demolition materials build a new house.
It’s not uncommon in Canada to see re-purposed materials used in a new-build or renovation. However, a Dutch architect has taken the throw-away building materials from a demolished office building and used them to entirely refurbish a derelict 19th century coach house that is his home. The result is stunning.

The 2,000-square-foot office building was built in the mid-fifties, largely from wood, and had been abandoned. Architect Rolf Bruddink figured there was enough material from the demolition to expand his 500 square foot coach house next door. Working with another designer, Niek Wagemans, a specialist in recycled material, the duo came up with a design that reused old rafters wooden beams, old flooring and aluminum sheathing used on the original building’s wall. Even the furniture in the refurbished coach house is built for recycled material.

In a country as compact as the Netherlands, being clever with materials and space is the way forward.

Bricks from recycled plastic
Like many regions in the world, Latin America suffers from a shortage of good housing, particularly in urban areas where close to 80 per cent of the population lives. At the same time, the garbage dumps and landfills are filled with plastic, such as bottles and packaging containers.

Colombian company Conceptos Plásticos now works with local communities to source this scrap plastic and other compounds, remold them into Lego-like building blocks, and then trains the local population to construct homes with them. This allows locals to build their own houses, emergency shelters, community halls, and classrooms very quickly. For example, a home for one family will take four people five days to construct with the recycled building blocks – and there’s no previous construction experience necessary.

The recycled plastic blocks resist natural disasters such as earthquakes, and are fire resistant once an additive is included in the molding process.  Conceptos Plásticos claims this system is up to 30 per cent less expensive than traditional methods. For example, a standard home can be constructed for a little over US$5,000 US.

With a lifespan before degradation of about 500 years, this new system offers shelters for many generations of families who can’t otherwise afford housing. 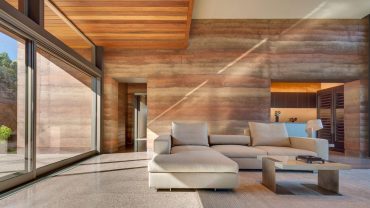 Rammed earth is not only a sustainable building process, it has the added feature of being visually dramatic

Rammed earth: the return of an old (really old) building method
Archaeologists have found buildings as old as 7,000 years using a system called ‘rammed earth’ for their wall and foundations. Typically, rammed earth was used in areas where soil contained clay, sand and gravel that could be compressed, using hard labour to ‘ram’ and compact it into wall shapes. The result was as solid as it was comfortable, since the earth itself moderated any temperature extremes outside.

It’s making a comeback of sorts. It’s not inexpensive, but when combined with modern strengtheners such as Portland cement, and chemical additives to modify the hydrothermal properties, compacted with hydraulic machinery, and then combined with insulation materials such as rigid foam, the result is striking as well as ecologically favourable. Proponents like Muskoka Sustainable Builders in Ontario point to benefits for occupants; the earth contains no toxins, will not decay or support the growth of mold due its ability to absorb and release moisture, and lowers heating energy use.

In terms of durability, a rammed earth structure built today will likely be in pretty good condition when archeologists visit 7,000 years from now.

Everything that is old can be made new again, whether it is materials themselves or ancient building techniques enhanced by today’s technology.

Related Stories
Endeavour Centre increases their range of sustainable building workshops for 2018
POST OF THE WEEK: "Your embarrassingly ignorant statements around politics make me question the soundness of your advice when it comes to building, and building a sustainable future.
The reality is, building is NOT rocket science. It's not even flying a commercial plane
Illegal 'villa' on top of 26-storey apartment building in China might be world's most flagrant building code violation