Towards the Passive House: A short history of energy-efficient housing in Canada (Part 1 of 5)

A 5-part series for contractors in which we outline the basics of the history of energy-efficient housing in Canada.

Editor’s Note: This article was sent to us by Joseph Hough, a carpenter in Vancouver with a lifelong interest in engineering, homebuilding and energy-efficiency. Joseph spoke to many Canadian builders and engineers as he drafted up this history of the Passive House in Canada. In particular, he would like to thank engineer Harold Orr of Saskatoon, a world-renowned energy-efficiency pioneer who was instrumental in the development of The Saskatoon Conservation House (1977), one of the very first highly-energy-efficient residential houses in Canada. Two months ago, Harold Orr, now 86, was awarded the Order of Canada for his life’s work in the field.

Now that governments are pushing energy-efficient concepts as part of Canada’s attempt to dramatically lower carbon consumption, the Passive House concept is getting increasing publicity in the mainstream media. But the Passive House is not a new concept. In fact, the idea is almost 30 years old.

There are three main criteria for a house to be considered a Passive House. One, the house relies on very low levels of energy for heating and cooling (15 kWh per square meter, annually). Two, the house relies on total “primary energy” (heating, hot water and electricity consumption) of 60 kWh per square meter annually. And three, the house has air leakage that does not exceed 0.6 times the volume of the house per hour. In a Passive House design, these attributes are achieved primarily through simple design, triple-glazed windows oriented to the south, simple heat recovery and ventilation (HRV) system, elimination of thermal bridging, and other techniques that will be explored in this article.

Formally speaking, passive houses first came into existence in 1990. Wolfgang Feist (Institute for Housing and the Environment, Germany) was writing his thesis under the supervision of Professor Bo Adamson at Lund University in Sweden. At that time, energy-efficient building laws were just emerging in Europe. The idea of energy-efficient housing, now motivated increasingly by concerns about global greenhouse gases, had been originally spurred by the price of petroleum stemming from the Middle East oil crisis in 1973. Fervent research into the subject gathered speed even as oil prices subsided again.

Canada’s early contribution to energy-efficiency research in this period included the Saskatchewan Conservation House, built in Saskatoon in 1977.  Other important experimental structures included the Rocky Mountain Institute (USA), The Philips Experimental House (Germany), and DTH House (Denmark). These and other projects were motivated by the fact that 30 per cent of global energy consumption went into the heating and cooling of buildings.

I spoke to Harold Orr, one of the lead engineers on the committee that pioneered the Saskatchewan Conservation House and asked him to reflect on the different stages of the development of energy-efficient housing in Canada. It has indeed been a revolution.

Mr. Orr said that there were four main stages to the process. 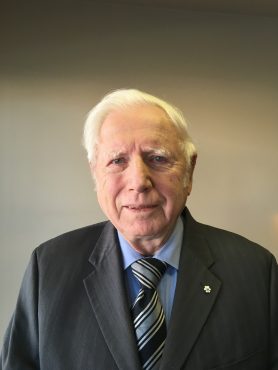 Saskatoon’s Harold Orr was recently awarded the Order of Canada for his pioneering research on energy-efficient housing.

The first stage, measuring air leakage, was problematic. Prior to this time, there were no accurate methods of measuring air leakage in homes. Mr. Orr’s professor, Dr. George Green, suggested to Harold that he should design and build an instrument to measure infiltration in buildings for his master’s thesis. Harold started by injecting into houses tracer gases (helium and sulphur hexafluoride) and, with the aid of some expensive gas detectors, he began measuring how quickly the air was changing in the house.

However, to widely perform such a test on Canadian houses across the country was impractical, because of the cost, time and labour involved. It took nearly a week to perform such a test, and the equipment would cost (in today’s dollars) millions of dollars.

Looking for a more cost-effective method to measure air leakage, Mr. Orr, working with the National Research Council in Ottawa, built and developed the very first blower door system. It was a piece of plywood with a fan mounted in the centre of it and a device to measure the airflow through the fan. This device could pressurize or depressurize an entire house. Using blower door technology, a technician can go around  and find some of the places where air is leaking into or out of the house. Some of these spots can be sealed almost immediately, especially in newly-built houses. Once sealed, the air exchange rate (called “ach50” i.e., air exchange rate at 50 Pascals of pressure) is measured.  The ach50 is, thus, a measurement of air leakage in regards to the volume of the house.