Towards the Passive House: A short history of energy-efficient housing in Canada (Part 2 of 5)

The Saskatchewan Conservation House, a pioneering energy-efficient house in Canada, was constructed in 1977.

This is the second of our 5 part series on how the Passive House arrived in Canada. In the first part (see here), the author Joseph Hough introduced the pioneering figure of Harold Orr, a Saskatoon engineer who was instrumental in the development of energy-efficient housing in Canada, for which he was awarded the Order of Canada in December 2017.

“We did some preliminary calculations and found that if we were to heat a conventional house with solar energy, it would require an Olympic-sized swimming pool to store the hot water to heat it, since there is little solar energy to be gained during the cold winter months,” says Mr. Orr.

A decision was, thus, made to try and reduce the energy needed, and the Saskatchewan Conservation House was born.

The committee sent another proposal back to the government of Saskatchewan about reducing energy consumption. However, “the government insisted on heating the house with solar energy,” says Mr. Orr.

“When we looked at conventional houses, we could see that there were three major components to heat loss. The insulated portion of the building (windows, walls and ceiling), the basement leakage, and air leakage. Adding insulation alone only reduced the heating needs by about 30 per cent.  We had to deal with the other two components – basement and air leakages.  Since Regina builders’ number one complaint was basements (and the house was to be built in Regina), we elected to build a house without a basement on a grade beam and pile foundation.  Since air leakage was the other major component, and I was the only person involved in research on air-tightness, I volunteered to personally go to Regina and install the air barrier.  At that time we achieved a remarkable tightness, and when the house was built it was likely the tightest house in the world at that time with an ach50 of 0.5,” adds Mr. Orr.

So by insulating the windows, walls and ceilings along with insulating (or eliminating) the basement and installing an air barrier, the energy consumption of the house was reduced by 90 per cent!

The third stage of the process was going out and teaching people how to build energy-efficient houses. “We needed some experience in terms of doing what we had done with the Saskatchewan Conservation House with existing houses,” says Mr. Orr. “We borrowed a house from Canada Mortgage and Housing Corporation and proceeded to retrofit it to achieve the same energy-conserving features of the Saskatchewan Conservation house. We wrapped the house in plastic; we super-insulated the house; we insulated the basement walls and basement floor. This is now what is called a ‘chainsaw retrofit.’ We get a chainsaw and cut all the fancy sprawling around the house; then we wrap the house in plastic.”

It’s worth mentioning that at this stage, the Canadian R2000 program was developed and it made a major reduction in the energy used to heat houses.

“In 1980, the Saskatoon House Builder’s Association built 13 houses to a very high level of insulation and tightness. They were trying to achieve a 75% reduction in energy consumption from traditional construction. To achieve this, we needed mathematical tools to assess the plans so that the contractor could achieve his goal. Dr. Rob Dumont had written a couple of short computer nuggets; one to determine the furnace size and the second to determine how much solar and other free energy might reduce the heating cost. I put the two programs together and after working with it to make it easier to use, eventually I called it “HOTCAN.” We eventually turned this program over to Energy Mines and Resources Canada who initially sold the program but called it HOT2000,” says Mr. Orr.

Mr. Orr recently retrofitted a four-suite apartment which couldn’t be rebuilt because of zoning. The house was very uncomfortable and consumed high level of energy. The 10’ concrete foundation cracked. For the uncomfortable condition, Mr. Orr suggested simple remodelling, adding a 6 mm polyethylene vapor barrier; 3 layers of R14 insulation batts inside the cavities of the 2X4 and 2X6 wall studs; 7/16 OSB and Tyvek membrane as external cladding; and, finally, the siding. 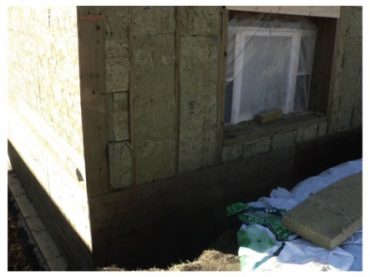 For the cracked foundation, and following excavation, the basement and foundation underwent the same remodeling as the walls. Then, the excavation with was backfilled with 4” of pea gravel in tile, granular backfill and 6” clay cap – from the bottom to the top.

The roof underwent the same retrofitting: It was covered with 6-mil polyethylene vapour barrier and 3 layers of insulation (held in place with 2X4 and 2X6s). OSB was then added – and topped with galvanized steel flashings. 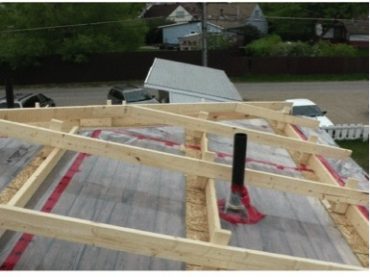 Before retrofitting, the ach50 of this 4-suite apartment building was 11.18. After retrofitting; it went down to 1.97. There was also 85 per cent reduction in energy consumption. The whole cost of retrofitting approached $18,000 – without the labour cost. “The 6-mil poly barrier must be in the outside to achieve an adequate air tightness,” asserts Mr. Orr.

Finally, I was curious to ask Mr. Orr about Dave Eyre, the chairman of Saskatchewan Research Council at that time, as I had read repeatedly. He replied: “In 1976, when the Saskatchewan government asked the Saskatchewan Research Council to build a solar house appropriate for Saskatchewan, the task was turned over to David Eyre. Dave at the time had very limited experience in building and none in solar energy, but he was an excellent manager. Dave proceeded to ask experts from the community to sit on a committee that had the expertise that he didn’t have.”

“Dave read everything he could find with reference to the problem at hand, did thousands of calculations, plotted many graphs, and wrote several papers and collected his and others work in a 160 page book entitled: A Collection of Technical Notes Relating to the Design of the Saskatchewan Energy-Conserving Demonstration House. I think it is safe to say the Saskatchewan Conservation House would never have been built without David Eyre,” Mr. Orr concluded.