A whole-house energy efficiency approach means looking at the entire building as a system. When it comes to walls, a full system includes framing, interior and exterior cladding, insulation, and windows.

Part Two of this series looked at ‘thermal bridges’ and how ‘thermal breaks’ can reduce heat loss through walls and roofs. The series now turns its attention to windows, and examines how technology is meeting the demands of an increasingly energy-savvy public. 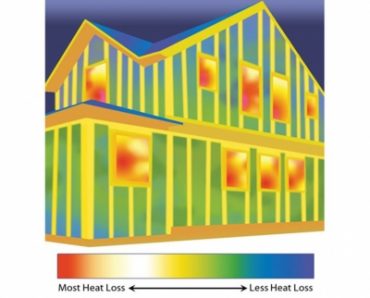 Heat loss through windows is significant, followed closely by thermal bridging through framing

Let’s always remember that the ‘R’ in R-value refers to thermal resistance; the higher the R-value, the more thermal retention and slower the heat loss. Every building material has an R-value, although much time is spent focussed on insulation materials themselves. However insulation is only one part of a home assembly. A very large part of that home assembly is glass, in the form of windows.

Looking at the entire system, not just the components
When engineers estimate the HVAC requirements for a new home, they generally assume that windows will rob the building up to 50 per cent of its heat. For example, a wall surface boasting insulation rated at R-50 might have windows that represent 15 per cent of the area. Common double pane windows with a typical R-value of about 3.0 can bring the resultant R-value of the wall system down to R-15! 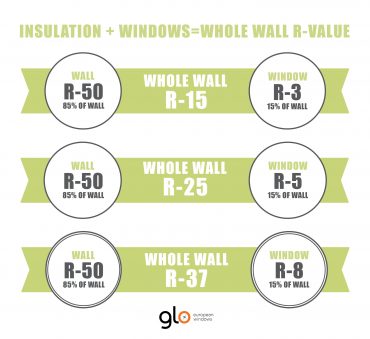 Windows are rated with a ‘U-factor’
The improvement can be actually felt by our bodies, explained by the fact that body heat radiates toward colder surfaces. The thermal conductivity of various windows manufacture can be compared using the ‘U-factor’, found on those stickers seen on windows when delivered from the manufacturer. The lower the U-factor, the better is the resistant to thermal conductivity, the opposite to insulation R-values.

E-coatings reduce solar heat gain in windows
It gets a bit more complicated when one looks at the other numbers on that rating sticker, such as the Solar Heat Gain Coefficient (SHGC), a number between 0 and 1. SHGC compares how much solar heat reaches the window from the outside compared to how much gets through to the inside; the lower the amount, the lower the SHGC number. While the typically cold Canadian climate might suggest a SHGC value around 0.42 in support of passive solar heating qualities of the window, west or south-facing windows in rooms with low-angle or continuous afternoon sun, might call for a lower number to prevent rooms from overheating. 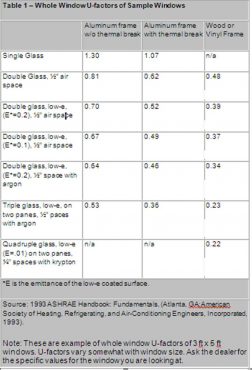 The E-coatings used to net those low SHGC ratings generally result in somewhat higher U-factors, however. Therefore, many suggest that windows with low SHGC ratings be restricted to south-facing walls, where the trade-off between solar heat gain and insulation values are worthwhile.

Windows are more than glass; they are an assembly
Like a wall system, the entire window system must be considered when it comes to energy efficiency. For example, a higher quality window will have less air leakage, those little cracks in the frame assembly that allow air to pass through. This is called the AL rating, although not all manufacturers post the information on the sticker.

Other ratings may appear on a window sticker. Visible Transmittance (VT), an optical property that indicates the fraction of visible light transmitted through the window, and range from 0 to 1.  The higher the VT, the more light is transmitted. Condensation Resistance ratings range from 30 to 80; the higher the number, the better the window is at resisting condensation.

Thermal breaks are a factor in windows, not just walls
The material used to frame the window has a big impact on the U-factor of the overall assembly. As the accompanying chart indicates, multiple layers of glass, gas-filled air spaces, and frame composition that leans towards wood and/or vinyl all contribute to a low U-factor. Unless a thermal break is incorporated into the frame, available if you look for it, metal frames don’t measure up to wood, vinyl (polyvinyl chloride), or fiberglass. Many manufacturers offer composites of two materials like wood and vinyl, using wood 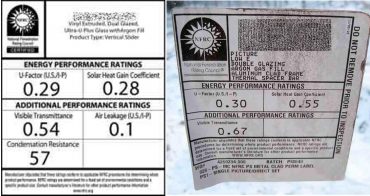 over top of vinyl to achieve a natural look, or a thin layer of aluminium or vinyl over wood for durability purposes. Also be aware that the spacers between the layers of double or triple pane glass and around the edges are factors to be considered for the same reasons as the material choice for the frames themselves. There is not only a heat loss issue but the benefit of reduced condensation at corners and edges when spacers are constructed from materials other than metal.

Careful attention to window details can result in measurable improvements in the whole-house energy efficiency of a new or renovated home. While costs increase with each added feature, they can be explained and justified not only by actual energy savings but by an increase in physical comfort. Ask your client to image themselves standing barefoot on a cold winter morning by a window, cup of coffee in hand, watching snow falling gently outside. Chances are they’ll like that image and be willing to consider an upgrade to more modern windows.

Follow the entire series…
Part One: How whole-house energy ratings are shaping the homes of the future
Part Two: Defeating thermal bridging

Next in the series…Insulation: More than just a thermal barrier