Are municipal councils in BC recognizing the risks of Step Code?

British Columbia’s Step Code, a five-level graduated pathway to Net Zero Energy ready residential construction, has been lauded by governments and environmental policy advisors across Canada as a sensible approach that might be worth copying. Step Code One means energy efficiency enhancements of up to 10 per cent beyond current code requirements. Step Five is full NZE ready, with levels Two through Four obviously falling in between. While Step Code enthusiasts claim the builder can choose their desired target level at will, in practise the Step Code allows municipalities in BC to impose a pre-determined Step Code level on their local builders in order to have projects approved.

As great as it sounds on paper or on the election campaign trail, there are a number of problems with the Step Code approach, something the residential construction industry across the country needs to be aware of before something similar comes into their jurisdiction. Builders in B.C. argue that the added costs associated with mandated Step Code levels imposed by municipalities, often without negotiation, makes the already-expensive B.C. housing market even more expensive for purchasers. Perhaps more importantly, it also flies in the face of the current national building code standards, thereby putting municipalities themselves in a position of liability risk.

Did Victoria just take a step back?
Local municipalities are getting push-back. Last week, in fact, Victoria City Council voted to only implement Step Code One for the time being. “I think it’s a pragmatic approach,” said Mayor Lisa told local media, explaining that Council has recognized the practical implications and the need to work with builders. “If we rush, we’re setting ourselves and industry and the climate up for failure.” However, Council also approved a motion that would see a jump to Step Three, a 20 to 30 per cent performance improvement, imposed by January 2020. 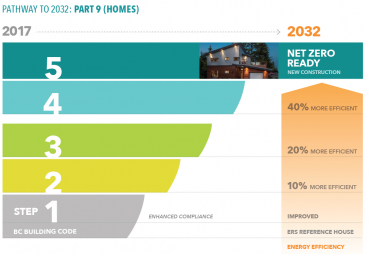 BC’s Step Code looks great on paper, but has failed to engage many municipalities and has frustrated the residential building industry

Although hardly a ringing endorsement, the residential building industry is not pleased, even with this moderated move. Casey Edge, Executive Director of the Victoria Residential Home Builders Association (VRHBA), points to a report by the Capital Regional District (CRD) released last October recommending Victoria take a cautious approach to the Step Code. “The reality is it will drive up costs, and with housing costs already at a place where we are sensitive to it, we are asking how can we do other things that might be better,” CRD board chair Barb Desjardins told local media.

Industry disputes government cost estimates of meeting Step Code
The province defends the added construction costs of the Step Code requirements, claiming the Step Code will only add between $1100 and $17,500 to the cost of an average home. Those numbers are hotly disputed by Edge and others in the industry. “The additional cost of $17,485 to build a passive home [a home that combines air tightness, insulation and heat recovery to reduce energy use] in our region is not credible,” says Edge. “A survey of my builders, some of whom are experienced  net-zero and passive home builders, say the additional cost will be between $55,000 and $110,000.” 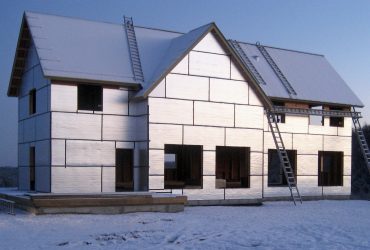 Who is really on board with this?
The District of Saanich on Vancouver Island, the eighth most populated municipality in B.C., voted earlier this week to essentially mirror Victoria’s decision, implementing Step One now and Step Two or Three (depending on house size) by January 2020. In a letter to the Saanich Council ahead of the meeting, VRHBA’s Edge referenced a report given to Council authored by the Municipal Insurance Association that warned, “Building bylaws are one of local governments’ greatest exposures to liability risks. A BC law firm says ‘Where a municipality makes a policy decision to adopt the BC Building Code, or enter into the regulation of construction in any way, the municipality must be very careful to properly discharge its obligations.’”

Furthermore, Edge pointed out in his letter that, “only 13 out of BC’s 160 municipalities are planning to move forward on the Step Code. Most municipalities in our region have expressed no desire to rush in, probably because they are already working with certified BuiltGreen builders building energy efficient homes based on consumer affordability. The Step Code offers no certified education.”

However, by adopting any level of the Step Code, Edge notes, “Victoria & Saanich own this,” and all the liability risks associated. Yet, as Edge points out, “by starting at Step One, the councils [Victoria and Saanich] have done what the BC government neglected to do, which is to direct all municipalities to start at Step One – some organizations have been advocating that municipalities start at Step Three.”

The challenge of perception versus reality
Cost, liability, and education; these three issues continue to plague environmental theorists, government consultants and politicians. On one hand, there is the desire to appear environmentally concerned. However, the practicalities of mandating any expedited efforts to modify building processes ahead of the national building committee who develop the national codes, represents a flight into danger.

Edge summarizes the situation neatly, telling Canadian Contractor his advice for municipalities.  “Wait for the national building code committee to do its work, then take their information and advice,”  he says. “We don’t like municipalities implementing their own standards and have municipal councilors, who are not equipped to assess builders, undermining the national building code. But if they’re going to do it, Step One is the place to start.”

In other words, it’s the best choice from a number of bad options.