Aaron and Josh are just a couple of carpenters from Indiana, ordinary in most respects except for a love of music and a couple of great voices. 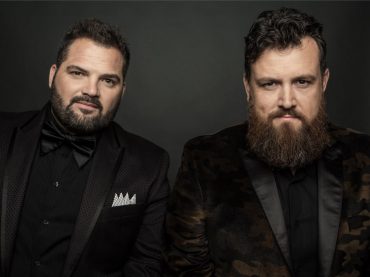 Long time pals, Aaron and Josh, have had millions of people listen to their music on Facebook and other sites

They’ve been friends for years but only when they started working together did they discover that they were a great singing duo. One day in 2015, they put together an on-the-job site recording on How Great Thou Art, uploaded it to Facebook and almost immediately became the toast of the internet — 15 million views in just a short time.

That was followed by the Christmas classic, Mary Did You Know. All told, The Singing Contractors as they call themselves, have had combined views of over 100 million!

Now they go on tour throughout the Midwest U.S., and have an online store selling hats, T-shirts and a couple of CD’s of their recordings. Their songs are also available through Apple Music and Spotify.

Yet they are as humble now as at the time of their discovery. “It’s pretty overwhelming to be honest, never expected it at all,” Aaron Gray told wishtv.com. “We’ve actually shed a few tears because we don’t feel like that we’re worthy of this at all.”

CLICK HERE to hear the Singing Contractors and their lovely rendition of Mary Did You Know.

Related
A contractor's guide to getting found on the Internet
Fixer Upper stars hit with $200,000 in fines and restitution
Five easy ways for tech-savvy contractors and subtrades to find each other
Homeshow contractors