Does a Carbon Tax Make Sense? I think I think so, says contributor and P Eng. Paul Duffy

"Here’s the cool thing—when you make a decision to conserve, you get doubly rewarded." 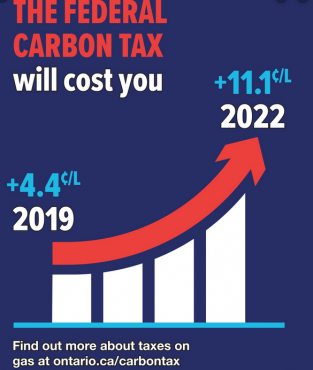 The federal election campaign was almost silent on the issue.  Justin Trudeau brought in the Carbon Tax but did not want to talk about it.  Andrew Sheer didn’t want to be tied to Doug Ford’s low standing in the popular opinion polls so he avoided the issue because it was widely seen as Ford’s issue. The other parties wanted to talk about how they would do a much better job on the environment, so they talked about practically everything other than the Carbon Tax. We can all be excused from not knowing enough about it.

Until recently, I confess, I did not fully understand how it works. Like many people I just thought it was another money grab to fund political programs so I was highly sceptical. In previous issues of this magazine you have heard me rail against such programs so you can imagine my bias on the subject.

I did not realize that, for the average consumer, the Carbon Tax gets fully refunded in the form of a rebate come income tax time. When I found that out I went from being sceptical to being confused! Why the heck do I need somebody to pick my pocket in dribs and drabs only to get it all back when I do my income taxes?

Then somebody explained it to me. Adding a tax to anything that is discretionary makes a certain number of people use less. People are more apt to use their car less if gas is more expensive.  If you have no choice, either because you use your car to get to work and there are no good transit options, then, on average, you are not unfairly burdened because you get the money back.  In the meantime, those who can, will be encouraged to conserve.

Here’s the cool thing—when you make a decision to conserve, you get doubly rewarded. Firstly, you save on the gas that you don’t use. Secondly, you still get the same rebate. And then you can put the money towards some other energy saving idea. Maybe treat yourself to an e-bike, or simply a more efficient vehicle when the time comes.

Now I still wasn’t fully convinced.  I kept thinking that the government will find some way of screwing this up… creating a huge bureaucracy around administering it… or dipping into the funds for pet projects. Then somebody pointed out that the government already collects taxes on gas and heating fuels.  You simply have to change the tax rate—no new bureaucracy is required!

There is still a possibility that governments will be tempted to dip into the funds for their own pet projects though and that is why we should be talking about this issue. I believe in a market-driven approach to conservation. That only works when we put a price on carbon. Governments all around the world are beginning to see that. We need governments to keep their hands off the money and continue to give it all back to consumers to make their own best choices.  We all need to hold their “feet to the fire” to make the tax as effective as possible.

So that’s the theory. At present the tax roughly equates to a $300 cheque at tax time. Don’t get me wrong, I like the cheque but I think $300 is not going to motivate too many people to make big changes.  My guess is people would do a lot more if the cheque was $1000.  Does that mean that I am advocating tripling the Carbon Tax?  Probably not yet, but I may be okay with it going up over time.

Oh yes, and it could be that if people start moving off gas to electric vehicles we will quickly find we don’t have enough capacity in that system… maybe we need an Energy Tax… yikes!

An independent building science, engineering and management consultant, with more than 30 years experience, Paul has contributed to Canadian Contractor numerous technical articles about energy-efficient construction, codes and innovations in recent years. His strength is translating technical information into plain language concepts that are easy to understand. He is based in Toronto.

Related
CaGBC opens Zero Carbon Building Program registration
Paul Bremer is a great renovator, and this is why I know
Design-Build Evolution: Paul Lafrance on the importance of charging for designs
Mining for ‘The Next Great Hire’: Where Paul and Janna Lafrance find gold

1 Comment » for Does a Carbon Tax Make Sense? I think I think so, says contributor and P Eng. Paul Duffy