Next week, in this space, watch for the first part of Rob Koci's interview with Mike Holmes, in which he responds to some of the criticisms (and compliments) he has received from CANADIAN CONTRACTOR readers. 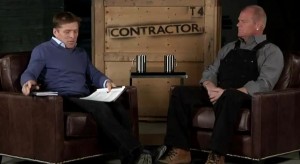 Well, you’ve had your say about what the show Holmes Makes It Right has done to our industry and your reputation. Now the host of the show, Mike Holmes, will get a chance to answer back. Last week, I did a 30 minute interview with Mike that we will be posting over the next few weeks on canadiancontractor.ca.

I was impressed with Mike during the interview. He was very, very forthcoming while we talked, and didn’t shy away from any of the criticisms you leveled at him. I’ll confess, I didn’t directly quote some of the more personal attacks we received (like, “I wouldn’t let Mike build my doghouse!”) but I did zero in on the three objections that came up again and again; that he doesn’t have a ticket for any of the work he does, that he gets the benefit of sponsors supplying product for free and that he is destroying the reputation of the industry to fill his own pockets.

Now that we have begun a dialogue with Mike, I expect it to continue. At the end of the day, Mike considers himself one of us, and wants to make the relationship between him and the industry right. The only way that happens is if we talk, you you need to continue to send your comments. It would be very interesting if you could send comments that were specific to a particular episode of the show. Just comment on this post to continue the dialogue. In the mean time, stay tuned to this website for more from Mike.