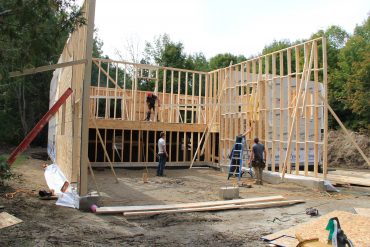 Proposed legislation will bring 1:1 apprenticeship ratios to Ontario construction, in line with the rest of Canada (photo: John Bleasby)

TORONTO (Oct. 23, 2018) – The Ontario government is introducing legislation to replace parts of Bill 148, a labour bill passed by the previous Liberal government just before this past spring’s election. The replacement bill is being called the Making Ontario Open for Business Act.  For those in the residential construction industry, these changes would, if passed by Ontario’s Legislature, represent a dramatic overhaul of apprenticeship training in the province, as well as addressing other labour issues. As part of the process, Doug Ford’s government says it will “wind down” the Ontario College of Trades.

Apprenticeship ratios to revert to 1:1
Key to the changes proposed is a change to the apprenticeship ratios in Ontario that will reduce ratios of journeymen to apprentices to 1:1, bringing them in line with most other provinces in Canada. “Currently, Ontario’s ratios are among the highest in Canada, limiting the number of apprentices an employer can train relative to the number of journeypersons they employ,” the release continues. “Ontario’s journeyperson to apprentice ratios likely contribute to the higher costs seen in the construction sector. For trades that are subject to ratios, the change to a one-to-one journeyperson to apprentice ratio would simplify and streamline how employers can hire and oversee apprentices, reduce costs and provide more flexibility for employers. Setting a single, lower ratio would better align Ontario with other provinces and territories in Canada.”

Proposed changes greeted with enthusiasm by industry associations
The proposals were greeted enthusiastically by the Merit OpenShop Contractors Association, a member-driven organization representing Ontario’s open shop construction sector which, according to its website “advocates and supports sound legislation and regulation which is fair to both employers and employees in the areas on labour relations, apprenticeship training, worker’s compensation, and safety.”

“Reducing the ratio system to 1:1 will allow our member companies to immediately hire additional apprentices,” said Michael Gallardo, Merit Ontario Executive Director. “A lack of workers is the number one issue facing my members and this policy change will significantly help them find and train those workers.”

“This is a great day for Ontario’s skilled workers and employers,” said Sean Reid, Vice President and Regional Director, Ontario, for the Progressive Contractors Association of Canada (PCA). “For many years PCA has been a strong advocate of bold action to remove barriers so that far more people can pursue skilled trades careers. We’re pleased the Ford government heard the call of workers and employers across Ontario by taking bold steps that will put thousands to work in skilled trades jobs throughout our industry and will lead to the development of the next generation of our skilled trades workforce.”

More labour reform proposed
There’s more to the proposed changes than apprenticeship ratios and OCOT. Jim Wilson, Ontario’s Minister Responsible for Red Tape and Regulatory Burden Reduction, joined Laurie Scott, Minister of Labour and Merrilee Fullerton, Minister of Training, Colleges and Universities, to announce further regulatory and legislative changes that, if passed by Ontario’s Legislature, will make it easier for Ontario employers to hire and make it easier for workers to find jobs and grow their careers in Ontario.

“When it comes to the economy, being ‘For the People’ means keeping and growing good jobs right here in Ontario,” said Wilson in a second media release. “This will not happen on its own. Instead it starts with cutting the unnecessary red tape that is driving jobs and investment out of our province.”

“As part of the additional reforms the Ministers announced that the government would take immediate action to repeal much of the burdensome, job-killing red tape imposed by the previous government through the notorious Bill 148. These reforms include maintaining Ontario’s current minimum wage at $14 per hour until 2020, to be followed by increases tied to inflation.” The government also will replace sections of Bill 148 that impact all workers in Ontario. “For the first time in Ontario’s history, workers will be able to take up to three days for personal illness, two for bereavement and three for family responsibilities,” the media release says. “Current provisions for domestic and sexual violence leave will be maintained, which is a valuable protection for employees. The proposed reforms will also reduce the red-tape burden around scheduling while updating the Labour Relations Act.”

More details will follow once legislation is passed. Canadian Contractor will be standing by.