Home automation comes of age, but not everyone is convinced

Cost, complexity, fear of hacking top the list of obstacles for continued growth

By any estimation, the global home automation industry is big and poised to get much bigger. Market research available from MarketandResearch.com claims, “The home automation system market is expected to be valued at USD 79.57 billion by 2022, growing at a CAGR of 11.3% between 2017 and 2022.” These are startling figures and reflect not only the attractiveness of the technology but also the increasing number of items in the home that can be wirelessly and remotely controlled or automated, in fact almost every mechanical aspect of the building itself including entertainment, lighting, security and appliances. 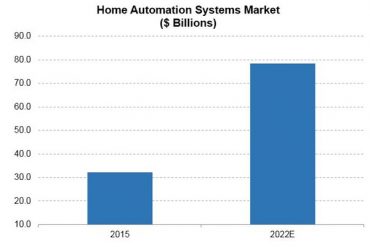 Some consumers still need convincing
At the same time, this projected growth coincides with challenges facing the home automation industry. For example, as products become more enhanced and more widely available from an increasing number of manufacturers, they are also becoming more costly, more complex, and raise fears of hacking. There is also the old-school attitude expressed so amusingly by Jonathan Marglois in an article published in the Financial Times. Calling home automation “a childish misuse of technology”, Marglois goes on to say, “Home automation is stress-inducing. At almost every installation I look at, there is to be found a frowning male stabbing at an iPad muttering about why the system is not working — and a female partner rolling her eyes. Switching lights and heating on manually, opening your own curtains and turning on the TV yourself is really very easy and never goes wrong.”

However, “Smart Home” has become a catch phrase heard whenever new homes or renovations are planned. Rose Barroso of Barroso Homes in Toronto finds the overuse of the term somewhat annoying but still helpful in her custom home building business. Barroso Homes creates leading edge, modern designs in the high-end Kingsway area of west Toronto, and has been including home automation in her multi-million dollar residences for years.

Barroso has learned that not every client feels ready for home automation. “I’ve had meetings where a client will say they they’re not interested,” says Barroso. “I won’t build it unless it is a Smart Home, so I will introduce the minimum. But I know the minute they get a taste, it’s like a Timbit; you can’t have just one. Automation is not because you’re trying to be cool. There are so many important factors in the automation of a home, from safety to comfort, never having to give your codes away, checking on your kids.”

Usually it’s the man of the house who gets bitten by the automation bug, but for reasons that often click with the spouse. Barroso gets anecdotal, telling clients, for example, about the time she and her family were out of the country and received notification on her smart phone that their home fire alarm had gone off. She panicked at first, then opened the security cameras and realized it was a false alarm. By that time the Fire Department had arrived, but she was able to tell them that they didn’t need to bust in the front door; she opened the garage door so they could gain enter and inspect the house.

Barroso goes through personal scenarios like that and finds that once she starts, clients start to add cameras, more cameras, and then door locks. “Sometimes they’ll say they don’t want any controls on the sound systems or TV’s. I give them ‘what-if’s’. It takes about two weeks, then they’ll ask for a meeting. They’ve talked to someone, a friend perhaps. They’re ready to talk about maybe home sound or something more. But the drywall’s in and they wonder if it’s too late to get all the wiring in place. I tell them, ‘I already put it in!’”

So many choices, so many questions
Without the guidance of a knowledgeable contractor like Barroso, most homeowners are lost at sea with all the choices. As the industry grows, so do the number of products and vendors. Some of the major electronic firms are already on-board, names like ABB, Honeywell International, and Siemens to mention just a few. Specialty firms like Control4 have also carved out a significant share in the custom home automation market too. Although  not inexpensive systems, theses systems boast proprietary software that reduce the risk of hacking.

It is the concern over hacking, particularly of security cameras and door locks through possible access routes linking appliances and home systems, that make proprietary systems appealing. At the same time, open platform product lines offered by Amazon are commanding great attention, warming more consumers to the concept of electronic control of their homes. For example, Amazon’s Echo smart speaker currently allows up to 250 third-party devices and appliances to be controlled through the Echo and Amazon’s voice-controlled digital assistant Alexa. IKEA is set to move into home automation too. The Swedish home furnishing and lifestyle retail giant currently offers smart lighting systems in Sweden and at selected locations in Europe, products that adjust lighting to suit the personal moods of the homeowner.

Demand for home automation will not likely diminish. The projections for growth are likely accurate. Given that certainty, contractors should consider it an opportunity for some added extras that can improve the project’s bottom line.

1 Comment » for Home automation comes of age, but not everyone is convinced