[This was No. 2 on our most read articles list for 2019, as the ongoing saga of Eco Life Home Improvements Inc. captivated us for the most heinous of reasons.]

David Murray, operator of Sudbury-based Eco Life Home Improvements Inc., has been called before the court several times over the past few weeks, answering to some of the estimated 24 small claims actions filed against his company. Some are beginning to reach their conclusion. Last week in two separate judgments, plaintiffs against Eco Life were awarded $4,600 and $25,000 respectively, plus additional costs and interest. Murray failed to personally appear at Cedar Street courthouse in Sudbury for either of these hearings, and failed to appear at some of the recent mandatory settlement conferences held in advance of other potential trial hearings.

Paid for work in 2016 that was never started
On Wednesday, May 15 in, homeowner Stephanie Orsini was awarded $4,600 plus two per cent interest as a result of Eco Life having failed to install five custom windows as agreed in December 2016 (Case SC-18-00005437-000). Orsini and her husband had pre-paid Eco Life $3,000 for the installation of these windows plus associated drywall detailing required for their installation, as well as to investigate a leaking skylight. “He was supposed to do it in the spring of 2017,” Orsini told Canadian Contractor. “He never showed up, he never called. I called his office but didn’t get any response.  I even went to the office periodically to try to get a resolution, to try to get him to get the windows done.” Because of the uncertainty surrounding any outcome, Orsini said that the window replacement work has never been done. 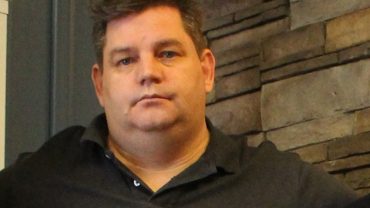 By awarding $4,000 to Orsini, Deputy Judge Nicola Munro recognized the higher estimated cost to have an alternate contractor perform the same work. The Endorsement Record also ordered that, “Ecolife shall pay costs fixed at $600, plus $300 disbursements, plus interest at the rate of 2%”. While Orsini holds only a slight hope that any money will be paid, she will nevertheless be contacting Murray’s lawyer in writing in an attempt to set up a payment schedule.

Murray/Eco Life ordered to pay the $25,000 small claims maximum
A larger judgement was handed down against Murray and Eco Life one day earlier. A claim involving a wider scope of exterior work that included window replacement under the province’s defunct GreenOn rebate programme (Case SC-18-00005789-000) was heard by Justice Gerard E. Guimond.

Homeowner Darrell Ranger was awarded the maximum $25,000 allowed under small claims court “for the deposits paid, the loss of the GreenOn grant, legal cost, and for the great inconvenience to the plaintiff,” Justice Guimond wrote in his Endorsement Record. He was also awarded $500 in additional costs plus post judgement interest at three per cent.

Promises made that were never kept
In court transcripts from the May 14 hearing obtained by Canadian Contractor, Ranger explained that he had found Eco Life’s ad in the local phone book. Ranger was given a quote for $9,200 to replace eight windows and a patio door by Murray’s sales representative “Josh” on September 22, 2017. He paid Eco Life a deposit of $4,600 at that time.

Ranger explained what happened next. “A month went by. I called Dave and asked him what was going on, like, did my windows come in. He had said I have to take that up with Josh, that was his job. So I called Josh and asked him. He says, ‘I’ll look into it and I’ll get back to you.’ A week had passed, didn’t hear back from Josh. Tried to call Josh again. He had picked up and hung up. I tried calling him back several times that day. He wouldn’t answer. So that evening I called Dave, told him what had happened, that Josh is ignoring my calls, and Dave had explained to me that the windows were still in Toronto, and that he’s sending a trailer down to pick them up at the end of that week.”

October, November, and December passed. No windows arrived. Ranger visited Murray at his office in early January where, Ranger said, “he offered me this government grant that was going on with GreenOn [sic]. If I were to insulate my house, outside walls, install windows, upgraded windows, that I would get approximately $10,000 back in government grants.”

A second contract, then a third…
Murray measured up the home on February 15, 2018, Ranger testified. In addition to Styrofoam insulation and siding, more windows were added, for a total of 10. Ranger was given a new quote and was asked for a $6,000 deposit in the form of a cashier’s cheque, which he paid. However, this latest contract agreement, presented as evidence in court, was back-dated to January 15.

The next day, Murray went to Ranger’s home again, and a third contract was signed to upgrade Ranger from vinyl stone siding to brick stone, for which Ranger paid $6,678 in full. Three contracts, three payments made, for a total of $17,278.

The work was contracted to be completed by March 15, 2018. Some of the insulation and siding was done that spring, but no window or door replacements were made. Ranger was then told some material was on backorder and worked stopped. After a heated phone conversation, Ranger testified that Murray said, “I quit” and hung up. Murray and his workers never returned to his house after April 23, according to Ranger’s notes. Phone calls to Murray had no effect, causing Ranger to delay further renovations to his home. “In July I just realized he wasn’t coming back.”

Ranger attempted to have other contractors finish the work that Murray had left incomplete. “They were very – how would I put it – not willing to want to finish the job,” Ranger told the court. “They don’t like finishing other contractors’ job because they have to warranty the work, and they didn’t start the job…And when they did quote me, it was pretty expensive because they wanted to make sure that they were gonna make money on it in case something was to happen from Dave’s work.” 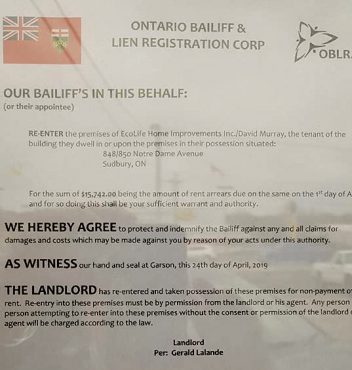 Criminal and consumer investigations continue
In addition to multiple small claims actions still to come,  Murray is scheduled to appear in court on May 29 to answer charges laid in April by the Greater Sudbury Police Services (GSPS) for theft under $5000 and trafficking of stolen property. This is related to missing tools owned by a former sub-trade employed by Eco Life in 2018 later traced to a pawn shop in the City of North Bay, 130 km away. An ongoing criminal fraud investigation by the GSPS into the activities of Murray and Eco Life Home Improvements also continues. In addition, non-bank lender SNAP Financial Group has launched its own internal investigation into the circumstances surrounding loans made to Eco Life clients through Murray.

Ontario Consumer Protection is on the case, MPP Gelinas says
Meanwhile, local MPP Frances Gelinas (NDP)  told Canadian Contractor that her office has now helped over 40 of her constituents file their complaints with Ontario Consumer Protection since late March. “The process is that they do not say which cases they are working on or investigating,” she said. “I can tell you that the minister [Minister of Government and Consumer Services, Bill Walker] is very well briefed on this issue— I have lost count of how many times  I have talked to him.” Gelinas also said that the Consumer Protection Office has contacted her office several times to confirm or clarify information in some of the complaints filed. “The many exchanges I’ve had with the minister leads me to believe  that they are treating this seriously. They cannot tell me if an investigator has been assigned but I know, because Sudbury is not that big, that an investigator was here this past week.”

Evicted from business office, business licence revoked
Shortly after the criminal charges for theft and trafficking were laid, Murray’s company was evicted from its rented premises near the end of April for failing to pay rent. A bailiff’s notice dated April 24, 2019 posted on the door of the Notre Dame Avenue location states that rent was in arrears for over $15,000. The office and showroom has since been cleared of any of Eco Life’s remaining possessions and were at last report in the possession of the bailiff. Eco Life’s license to conduct business in Sudbury was also suspended by the City in April. Murray intends to appeal that decision at a Bylaw Meeting on June 5.