The Montreal-based firm, which delivers building products to job sites through a contractor-friendly app, says it has grown by 300 per cent in the past 12 months 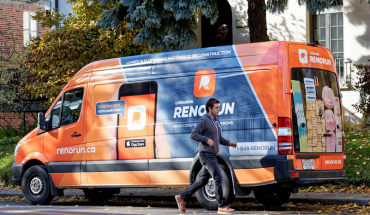 Through a builder-friendly app, RenoRun saves contractors time and money by planning, sourcing and delivering scheduled or just-in-time building supplies and materials in less than two hours directly to the jobsite.

“RenoRun is using data-driven methodologies to create major efficiencies for the construction industry,” said Magaly Charbonneau, principal at Inovia Capital. “By providing a superior experience and reliability to contractors, RenoRun has an opportunity to create an entirely new vertical in the homebuilding and renovation industry. We’re excited to help them scale their vision.”

“One of the costliest factors on a jobsite is a loss of efficiency,” said Eamonn O’Rourke, CEO and founder of RenoRun. “Running out of materials not only affects the build itself, but it also puts the crew down a worker when someone has to go buy more lumber, drywall or other materials. We created RenoRun to put an end to this age-old problem. Our goal was to help crews finish on time and finish efficiently, and that’s exactly what we’re doing. This funding is going to allow us to do even more for the men and women in the industry, who need as much efficiency as possible in one of the tightest labor markets of the 21st century.”

During the past 12 months, RenoRun has seen more than 300% customer growth. The company has grown from seven to 90 employees in 10 months and celebrates diversity in the software and construction industries, with women holding two of five executive positions and two of four board member positions.

“We have seen a passion, transparency and dedication from Eamonn and his team that’s already having an outsized impact for the general contractor community,” said Andrew Bebee from Obvious Ventures. “We are excited to be a part of the road ahead.”

“Digitization is the future of the construction industry,” O’Rourke said. “Software like RenoRun have the ability to redefine the sector across the board. Productivity, efficiency and costs are more manageable, thanks to platforms like RenoRun. Our goal is to be a fundamental layer in the builder’s technology stack as we move into a fully realized, digital construction revolution.

After spending more than 20 years in the construction industry in Ireland, Australia, Canada and the United States, O’Rourke saw the need for fast, quality jobsite material delivery. As a result, he founded RenoRun in 2017. The company offers a complete platform that has revolutionized material delivery technologies and is currently delivering materials in the Canadian cities of Toronto and Montreal, as well as in the U.S. city of Austin, Texas with plans to expand geographically in 2020.

Related Stories
OFL president Sid Ryan explains what his union organization has done with the WSIB’s $12.3 million funding
WSIB’s $12.3-million funding of Ontario Federation of Labour is a ‘slush fund,’ MPP alleges
We have the technology in this industry. Why aren’t we using it? Report from The Buildings Show
Building trades union to build $1.2 million monument to construction workers in Ottawa

No Comments » for RenoRun secures $22.5-million in investor funding