Is the sun rising or setting on small scale residential solar?

What happens to financial viability as installation grants and big subsidies disappear?

Contributing Editor John Bleasby wanted to explore the financial viability of installing a PV solar array on his rooftop. After a thorough analysis, he concluded the numbers didn’t add up.

The Net Zero Energy concept says a house should produce at least as much energy as it uses. It’s the third column of NZE support that includes a tight building envelope and internal air management. In terms of power generation to offset power use, the installation of PV solar arrays on a home’s rooftop has been the popular choice. Provincial grants for installation, plus generous buy-back contract programs for the power generated, has spawned a vibrant, growing industry over the past ten years. Media attention has coupled the importance of doing “the right thing for the environment” with a strong financial argument. Some homeowners are actually making tidy profits from their solar installations. For example, early adopters to Ontario’s MicroFit program (now cancelled) were given 20 year contracts that will pay them over $0.80/kWh for power that the provincial utility resells for $0.15/kWh or less.

But times have changed. Power generated from renewable sources of all kinds, including industrial-sized wind and solar farms, have contributed to an electricity surplus in many parts of the world, forcing wholesale prices lower and lower. The result is little incentive for governments to subsidize new residential solar installations or to pay homeowners enormous premiums for the power they generate.

So what happens now? All good conscience aside, does it make financial sense to install a PV solar array on a home today? To find out, I decided to analyse my own house, comparing my actual electricity usage over 12 months with the power a PV solar array on my rooftop might generate.

My House: A brief outline
My wife and I live in a three year old house two hours north of Toronto, a modern 3-bedroom design on two levels. In all, there’s over 3200 square feet. The foundation and walls are ICF, right to the roof. The underside of the roof deck is insulated with spray foam. There’s low-E glass and LED lighting throughout. We have a high-efficiency forced air natural gas furnace coupled with an air conditioner. We have a natural gas water heater, cook-top and fireplace. There is also a 40 foot swimming pool that, although unheated, requires the filtration system to run 24/7 for four months. In summary, the house is extremely well insulated and energy efficient, despite the luxury of a pool. It’s an efficient house with relatively low electricity usage, as the chart below indicates. 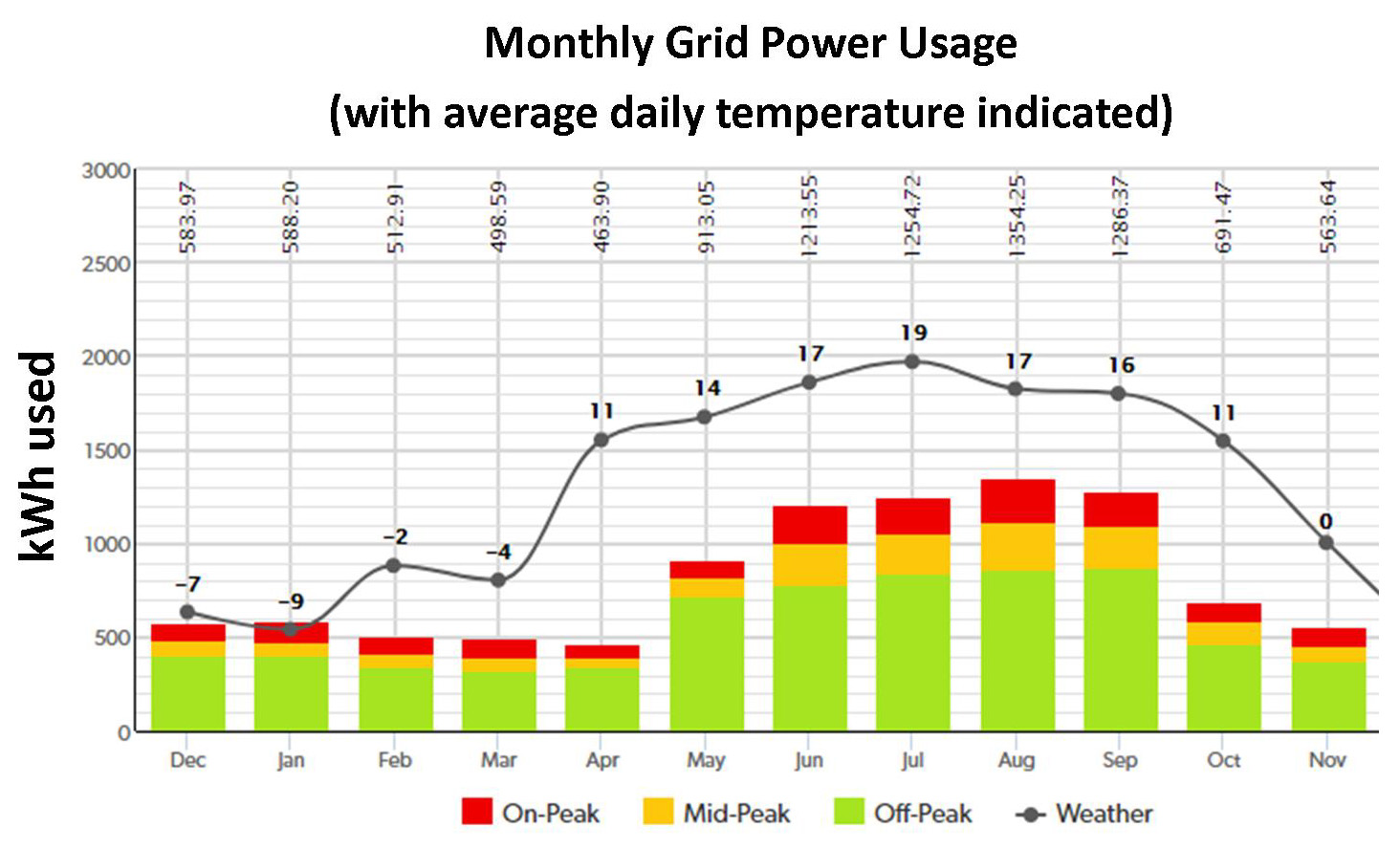 My power utility shows me how much monthly grid power I use, and when. Note the summertime peak due to the swimming pool and occasional air conditioning (graphic: My Hydro)

Step One: What could I expect from a PV array on my roof?
To design a hypothetical PV array system, I used software developed for the National Laboratory of the U.S. Department of Energy called PVWatts Calculator. According to its website, PVWatts allows homeowners throughout the world to estimate the production and cost of grid-connected PV energy based on their location, and local 12-month historic weather and sunshine patterns. The software found my house using Google Maps and let me outline the perimeter of a PV array on my roof. It then indicated that an 11kWh system would fit, and calculated how much power that system would generate based on historic data of sun and weather. I then used data available from my power utility, and compared the two sets of data over a full 12-month period. I did not include debt retirement, account and delivery charges levied each month — they are a constant now and in the future.

As the graph below shows, given my current low usage of electricity, the PV array would generate more power than my home needs, almost every month of the year. In fact, by the end of the year, I would generate a surplus of 4,315 kWh.

My hypothetical PV array will generate a surplus of power almost every month of the year, and a large annual surplus at the end of 12 months (graphic: John Bleasby)

I then looked at the actual cost of the electricity I used over the past 12 months versus the value of the electricity my hypothetical array would generate. The surplus value was $442 at current rates.  However, it’s important to understand that under net metering programs across the country, most utilities will not pay for any surplus. They ‘zero-balance’ any surplus generated over 12 months and start again the next year, or charge the going rate if more power is used than generated. In other words, I have to use it or lose it. That’s the heart of the issue.

What to do with my surplus power?
Since the value of my surplus is pretty small, so investing significant new capital to replace my natural gas heating system, for example, would be a poor decision. I could possibly switch to an electric water heater, but it’s less efficient than gas. Maybe I could buy an electric car and charge it at home.  However, my rural location conflicts with the range limitations of most electric vehicles. Perhaps I could add a storage battery system to take advantage of off-peak utility power costs and to store my surplus power. However, as the chart above indicates, we’re already quite good at taking advantage of off-peak rates.

Does it make financial sense? Five cost scenarios are examined
I determined that a professionally installed 11 kWh PV array system would cost about $28,000. I don’t have that kind of cash — I would have to borrow the money.  (If I had the cash, I would still use the same interest rate, as an “investment opportunity lost” factor). I came up with five scenarios.

An analysis of the total power generated by a PV array, total costs of loan repayment, and resultant cost per kWh, compared to continuing to buy power off the grid over a 25 year period. The grid appears to be less expensive, all capital costs and risks considered (chart: John Bleasby)

Many factors cloud residential solar’s future
Of course, my conclusion is based on current grid and PV array costs. In order to favor a PV array on my home, many things would have to happen: installation grants must be at least 30 per cent, special financing would have to be available, grid electricity prices would have to increase steadily, and the cost of solar arrays and storage battery systems must come down. Some of these are possible, others unlikely.

As a result, the strong financial argument for achieving full Net Zero Energy using PV solar arrays on homes which was so effective for so long, doesn’t look so compelling going forward. It ultimately might come down to the dollar-and-cents value each homeowner puts on their environmental concerns.

Read more about the “3 Columns of Support for NZE”
Part One: Sealing the Envelope
Part Two: Change is the Air; developing an IAQ strategy
Part Three: Air management Q’s & A’s

9 Comments » for Is the sun rising or setting on small scale residential solar?