Three years later, where are those Tesla solar roof tiles?

Take our Tesla quiz to learn what is (and isn't) going on!

They were supposed to change the way everyone thought of rooftop solar panels. Elon Musk pulled out all his famous chutzpah when he launched Tesla’s breakthrough solar roof tiles back in 2016. Gone would be those ungainly and attractive solar PV arrays! Now solar panels would look just like any other roof in the neighborhood! What a great pitch!

But Musk, his company Tesla, and their adoring public have recently become more focused recently on electric cars, battery storage, rockets into space, and tunnels underground. Solar roof tiles seem to have taken a back seat.

Confused by the hype and the disappearing act? Let’s take a Telsa quiz and learn exactly what progress Musk has made in his quest to change the residential roof tops of tomorrow.

Question 1:
How many installations of Tesla Solar roof tiles are actually connected to the grid in the USA, total?
A hundred? Two thousand? Twenty thousand?
Answer: Last count was about twelve. That’s right 12! Two more than 10! This, despite Musk’s claim on CNBC and Reuters of “several hundred homes.” By the way, there are none in Canada.

Question 2: How many deposits has Tesla collected for solar tile roof systems?
Answer: As of May 2018, Tesla had collected around 11,000 deposits of  US$1,000 each from excited homeowners. And although it has delivered and connected barely more than the number of fingers on your two hands, the company continues to promise a significant ramp-up in production for 2019. 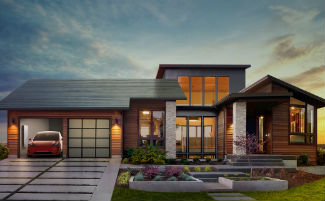 Tesla solar roof tiles: They good from far, but they are far from meeting delivery expectations

Question 3:
How long does it take to install a Tesla solar roof tile system?
Initial claims suggested that installing a Tesla solar roof system would take the same time as installing a regular tile roof system — approximately five to seven days. How’s that actually worked out?
Answer: According to electrek.co, the installation time has taken, on average, about two weeks, ie. close to twice the length of time for a standard roof tile installation. Time is money!

Question 4:
How much does an average Tesla solar roof tile system cost?
Take a guess. Maybe $25,000? How about $40,000?
Answer: We have to use cost estimates from the United States since there are no known installations in Canada. Tesla claims the cost of their solar tile system is $21.85 per square foot.  The cost price for a 2,500 square foot home would therefore be around $54,000. Tesla claims that is attractive if an entire new roof is being considered, as in new home construction. As a retrofit on an existing roof… well, you decide.

Question 5:
Are the Tesla solar roof tiles worth the cost premium over regular PV arrays?
Answer: Again, you decide.
It’s the question asked by earthtechling.com recently. They looked at option one — replacing the shingles of a 2500 square foot roof with standard shingles and then adding regular solar panels. Then they looked at installing a Tesla solar tile system on that same roof. They estimated the Tesla system would cost about 235 per cent more, exclusive of any tax credits. Both roofs would net about 6.2KwH of power, which was the average U.S. residential installation in 2018. As if the payback period for a rooftop solar installation wasn’t long enough already! But they sure look pretty!

Question 6:
How many types of solar roof systems does Tesla make?
If you thought Tesla only made the solar tile system, you’d be wrong.
Answer: In fact, most of Tesla’s rooftop business comes for their line of regular PV array panels marketed through their subsidiary Solar City. Both Tesla’s solar tiles and their PV array cousins use Panasonic’s HIT series of ultra-efficient solar cells. The efficiency improvement of these over standard cells is significant, claims earthtechling.com. “Most standard-quality solar panels see efficiency around 16-18 per cent. That is, they are able to convert 16 to 18 per cent of all the sunlight that hits the panel into usable electricity. Panasonic’s HIT panels, on the other hand, enjoy 19 to 21 per cent efficiency….A solar panel that is 21 per cent efficient can actually produce 30 per cent more electricity than a solar panel that is 16 per cent efficient!”

Elon Musk has found himself distracted by cars, rockets, flamethrowers… and other things.

Question 7:
How much has Tesla’s share of the U.S. residential solar market grown?
Answer: It hasn’t. It’s shrunk.
While demand for residential solar has increased, thanks to tax incentives and legislation in certain states concerning new home construction (think California), Tesla has seen its share actually slip. As reported in greentechmedia.com, data from Wood Mackenzie Power & Renewables indicates that, “Tesla’s residential solar installation market share has dropped from 33.5 per cent a few years ago to 9.1 per cent, allowing Sunrun to become the market leader. Sunrun’s direct business installed 163 megawatts in the first three quarters of 2018, while SolarCity installed 156 megawatts.”

Question 8: What car do Tesla sales representatives drive for work?
Answer: Not Teslas! Company-issued, gas-powered Chevrolet Sonics, apparently. We thought you should know.